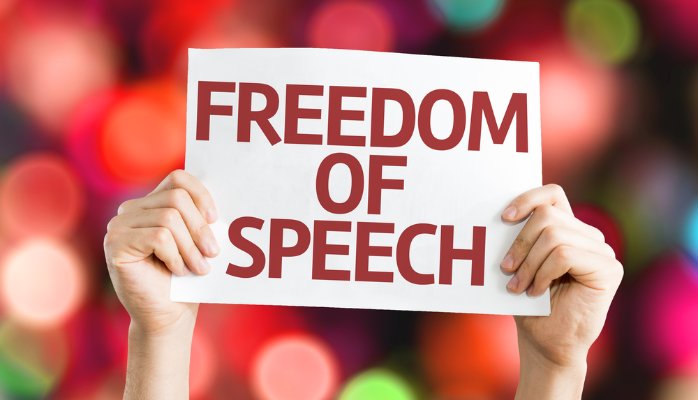 There are many priorities this decade that demand our attention and prayers. Fulfilling the Great Commission has remained God’s paramount priority for the past 2000 years because it’s the command of Jesus that will bring the greatest good to the planet–now and in eternity.

We could also list issues like abortion–the great sin of shedding innocent blood (Proverbs 6:17). This quiet slaughter of over one billion innocent children worldwide in the past three generations certainly qualifies as paramount in the eyes of God.

But I’m thinking of another problem I never saw coming in the United States and world until just a few years ago. This issue may greatly impact the other two.

The silencing of free speech.

One of the problems of growing up in America is taking for granted many blessings and freedoms that come from our country’s heritage, Western Civilization, and widespread acceptance of the biblical worldview. We think it has always been this way and that every nation on earth is like us–basically free.

Nothing could be further from the truth.

The history of the world–no matter who interprets it–is littered with tyranny, slavery, human suffering, and the utter destruction of human rights and freedoms by tyrants/governments you can see and demons that you can’t that inspire them.

Freedom is rare on earth–and experienced by very few people.

This is one reason why the birth of the USA is considered a “five thousand year leap” when a society broke the chains of five millennium of human bondage and established a nation where all citizens were guaranteed a right to life, liberty, and human happiness (property).

It happened because the principles of biblical liberty leavened the Roman Empire, revolutionized Europe via the Reformation, and eventually found fertile soil in the American colonies and the establishment of a nation built on self-government under God.

“Let freedom be proclaimed throughout the land to all the inhabitants” (Leviticus 25:10). It happened in ancient Israel, but in very few other nations prior to the 20th century. The world has rarely seen “freedom”–and today is no exception.

The Heritage Foundation recently published its annual Index of Economic Freedom. Please take the time to look it over. You’ll notice that even in this era of the global explosion of the Good News of Jesus Christ (the Fourth Wave), over half of the world’s countries still provide little freedom for their people.

For many years, the United States reigned as the most free economy on the planet–and we took that hallowed spot for granted. But according to the 2022 Index, in the last year alone, we’ve slipped from 20th in the world to 25th in terms of economic liberty.

Economic freedom is an outflow of personal character and liberty-producing laws.

Do some of you remember the free speech movement at Berkeley and other universities during the 60s and 70’s? I thought the students simply wanted freedom of expression. But now those same students work as administrators and faculty in the same institutions and are doing their best to deny free speech on campuses.

Because the goal of the free speech enthusiasts then was not liberty, but power. “Free speech” promoted that goal a generation ago. Today, denial of free speech promotes the same end. The end was always power, and to God-deniers, the end always justifies the means.

In America today, the former free speech fighters in government, the media, academia, and Big Tech lead the way to silence free speech, both in America and around the world.

Ailan Evans shares how Big Tech censorship regarding Covid  is but one example of the rising war on free speech:

Major technology companies and social media platforms have removed, suppressed or flagged the accounts of more than 800 prominent individuals and organizations, including medical doctors, for COVID-19 “misinformation,” according to a new study from the Media Research Center.

Instances of censorship included Facebook’s decision to flag the British Medical Journal with a “fact check” and “missing context” label, reducing the visibility of a post, for a study delving into data-integrity issues with a Pfizer vaccine clinical trial.

Facebook also deleted the page of the Great Barrington Declaration, an open letter led by dozens of medical professionals, including Dr. Jay Battacharya, a Stanford epidemiologist, and Dr. Martin Kulldorff, a former employee of the Centers for Disease Control and Prevention, which advocated for less restrictive measures to address the dangers of COVID-19.

“Big Tech set up a system where you can’t disagree with ‘the science’ even though that’s the foundation of the scientific method,” Dan Gainor, MRC vice president of Free Speech America, told the Daily Caller National Foundation. “If doctors and academic journals can’t debate publicly, then it’s not science at all. It’s ‘religion.’”

Big Tech also scrubbed podcast host Joe Rogan’s interviews with scientists Dr. Peter McCullough and Dr. Robert Malone, the latter of whom was instrumental in pioneering mRNA technology. Twitter banned Malone from its platform permanently in late December over the virologist’s tweets questioning the efficacy and safety of the COVID-19 vaccine.

In addition to medical doctors, the study examined instances in which members of Congress were censored by tech platforms.

These included an incident last August in which YouTube suspended Sen. Rand Paul, R-Ky., for posting a video arguing that “cloth masks” are not effective against the coronavirus, a view later echoed by many prominent medical commentators. Twitter also flagged a tweet from Rep. Thomas Massie, R-Ky., in which he wrote “studies show those with natural immunity from a prior infection are much less likely to contract and spread COVID than those who only have vaccine-induced immunity.”

The denial of free speech in America and worldwide is growing every day. It’s a part of Big Tech censorship mentioned by Evans, but also includes “cancel culture” on college campuses, media black-out of certain stories, and political figures lying to the public with impunity with little or no journalistic rebuttal.

When you have the time to dig deeper, especially into the growing censorship of the Internet, please read Kara Frederick’s Combatting Big Tech’s Totalitarianism: A Road Map.

Then act upon what you learn. If we don’t resist the speech fascists of the 2020s, the 2030s might see the rise of worse totalitarian regimes–just like the Nazis in the 1930’s.

Or possibly a one world tyranny.

But there are exceptions.