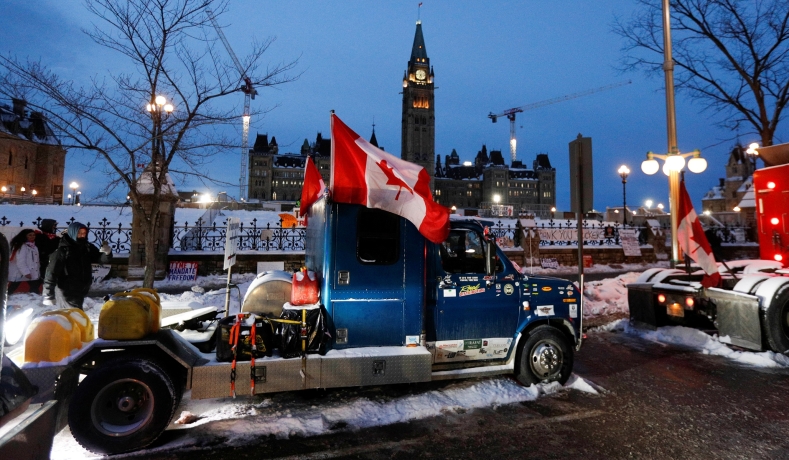 I never thought I’d see the day when I agreed with a Marxist slogan.

“Workers of the World, Unite!” recently became the rallying cry of Canadian and USA truckers to cast off the restraints of vaccine mandates and liberate the North American continent from creeping socialism and tyranny.

Let’s join the truckers on our side of the border, and shout out with them, “Workers of the world, unite!” We must take a stand against Covid tyranny–now.

Workers of the World Unite!–for Freedom, not Marxism.

It’s amazing how the cry of the human heart for freedom can take many forms in different times –worldwide and in many nations.

During the middle of 18th century, colonial patriots joined together to stop the increasing tyranny of King George and the British Crown. They formed “Committees of Correspondence” to publish their concerns and stay in touch with each other.

On December 16, 1773, the Boston patriots tossed thousands of dollars of English tea into the harbor to protest unjust taxation by the England. This act of resistance to government encroachment would ultimately light the candle of the American Revolution.

Three years later in 1776, Thomas Paine published Common Sense to make the case for liberty–which became America’s first best-seller, and launch the cause of freedom. It would take seven years and 25,000 people dying from war and disease for the United States of America to be born–in freedom.

In the next century, Frederick Douglass helped ignite the uprising against slavery, numerous abolitionist societies were born, and underground railroads transported African Americans to freedom. It would take a great Civil War and, a century later, the courage and persistence of Dr. Martin Luther King Jr./civil rights movement, to guarantee full human rights for millions of Americans.

From Tea Party patriots, to abolitionists, to civil rights protesters, God has used common folk to work for liberty in America and around the world.

Today’s He is using truckers.

I’m sure you’re aware that thousands of truck drivers have descended upon Ottawa, the capital city of Canada–in the freezing cold of winter–to demand that their government cease and desist the vaccine mandates that are crippling business, emboldening bureaucrats, and stifling freedom everywhere.

Justin Trudeau, the Canadian prime minister, fled from the Canadian convoy to some undisclosed location. He didn’t want to face or listen to his people.

I believe the Canadian truckers are the “Minute Men” of the 21st century–the most vocal and sacrificial group to take on the global political tyranny that Covid has unleashed. We should be grateful for their inspiring actions.

Most of us have known for years–thanks to the Great Barrington Declaration and other voices of sanity–that the Covid virus was a serious disease that we should handle like any other–isolate the sick and vulnerable, increase good hygiene and health practices, but go on with our lives.

No disease in the history prior to the 21st century has ever been used to shut down and disrupt commerce, travel, and demand people mask up and social distance to combat it.

But the Marxist/socialist elites of the world didn’t let a “crisis go to waste,” but used it to promote stricter governance (the “Reset”) and especially try and squash the Judeo-Christian worldview and its championing of human freedom. They  used the pandemic to promote fear worldwide, grow government, and condition people to “obey their leaders”–while not asking any questions.

They did it because you can’t produce Marxism, Nazism, fascism, communism or any other form of top-down power without extinguishing human liberty through fear and coercion–all marketed to the masses for “the public good.” That’s a major reason for the global Covid scare–to empower government and diminish freedom.

Yet, a notable John Hopkins University report–analyzing twenty-four different studies–has confirmed what we already knew. The Covid lockdowns, masks, and hysteria hurt more than helped the people they were meant to serve. The authors concluded that lockdown policies are “ill-founded” and suggested they be rejected.

The day after the report was released, every coercive restriction on people should have been removed–worldwide. Yet, many cities, schools, governments, and nations continue to keep their people in pseudo-slavery to their whims.

Sometimes The Babylon Bee, a satirical website, gets to the heart of a matter better with comedy than anything else:

Socialists Condemn Workers Of The World For Uniting https://t.co/I7NmRcwCfI

Jarrett Stepman, who inspired the title for this article, gives a probing perspective on the growing power of government and our heroes, the truck drivers:

The left has morphed into the political movement of an elite, global managerial class that believes it has the right to rule and govern in any way it sees fit.

It believes that any policy—no matter how repressive—that suits its cultural beliefs, tastes, and general political milieu must be made mandatory.

Opposition is inherently illegitimate as the left sees it.

And those who stand in opposition are not to be reasoned with. They are to be dismissed, ridiculed, bullied, and smashed into submission by the state and the Big Tech companies that do their bidding. Opponents deserve neither sympathy nor decency from the global movement of diversity, equity, and inclusion.

But, as one trucker wrote for Newsweek, this movement in Canada is unlikely to fade. The truckers won’t stay quiet, and people are becoming aware that something is rotten in the heart of the presumably free societies of the Western world.

The petty tyrannies of a failed ruling class are becoming as difficult to ignore as the honking in Canada’s capital.

Thankfully, the truckers-for freedom movement is also coming to the United States. Brian Brase of the Family Research Council shares good news for those who love people and freedom.

The truckers of America will be glad…since they’ll be rolling through that friendly ground during next month’s Freedom Convoy. Taking their cue from the Canadian truckers up north, a group of Americans plans to carry on the protest, starting in California on March 1 and ending up in the nation’s capital. Brian Brase, who co-founded the effort, says it’s not just about trucking. It’s about “looking out for our community” and “stop[ping] the mandates.”

“We’re not anti-vax,” Brase explained on “Washington Watch.” “We just we believe that you should have the choice.” Looking around the country right now, he said, “it’s really kind of sad.” [People] are losing their jobs that they’ve had for years. These are some of the most talented people in their fields. The military spends millions of dollars in training on these soldiers, and they’re being forced to leave because they won’t get the vaccine because they don’t want to put something in their arm. It violates not only your constitutional rights as an American, but it’s violating your rights as a human being, what some would call your God-given rights…”

It’s the eternal struggle between good and evil, truth and error, power and freedom.

What can you and I do?

Let’s pray for the truckers, support them financially, and stand by them in the cause of liberty. Let’s take off the masks, remove them from our children, stay home when we’re sick, protect the vulnerable, return to church, get back to work, and make our nations free again.

Workers (and people of he world) unite!

And thank a trucker today for shining a spotlight on freedom.