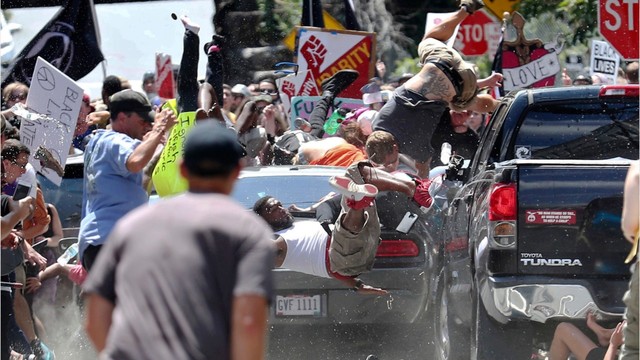 The violence in Charlottesville, Virginia over the past weekend is stirring many passions and story lines.

The Trump-Is-Wrong-About-Everything liberal press used the occasion to slam the president’s response on day one, then stayed cynical on day three when he got more specific.

Many newspapers created the impression that Nazi-sympathizers and white supremacists are taking over the nation–while progressive anarchist groups actually out number them by hundreds of thousands. Others painted the cultural battle as Left versus Right.

I have a better idea.

Let’s blame sin–not race or turn signals. That might bring revival and reconciliation to America.

In most of the news broadcasts or articles about the violence in Charlottesville, the action was framed with the words “Right” and “Left.”

I rarely those terms because they have no moral or historical meaning. “Right” and “Left” are directions we use or turn signals in a car. One is not “good or bad,” or “right or wrong.”

Pundits use them to create the impression that there are two rival factions in our political culture, presumably conservative on one side and liberal on the other. They say that conservatives are the right and progressives are the left.

Thus, the reasoning goes, that far right, or alt-right means extremely conservative. Likewise, far left or alt-left means ultra-liberal. The worst of both bunches are crazy right and left–and violent to boot.

So, they say, the playing field in Charlottesville contained two different extremes. Alt-right groups obtained a permit to protest the removal of a Confederate statue. Alt-left groups showed up to resist them. According to many reports, both sides carried weapons. Fortunately, they weren’t used.

And, unwisely, the police stood down.

Then we are told that an alt-right guy drove the vehicle that killed and maimed people. Thus, the mainstream media narrative proclaimed three not-so-subtle messages: 1) The “conservatives” are the bad guys, 2) They’re taking over the United States, and 3) Donald Trump is one of them.

Almost all violent groups in America come from the progressive/secular side of the tracks. Nazis, Socialists, Communists, anarchists etc. hold one thing in common–their humanist/atheist orientation. They may have different causes. But they share the same morals and motivations. Without godly character and ambitions, they all are willing to use violence to gain power.

If “Conservative Right” and “Liberal Left” were honest opposites, then alt-right would be Martin Luther King Jr. and alt-left would be Alex James Fields–the domestic automobile terrorist in Charlottesville.

Right and left do not work as explanations. The better perspective is good (non-violent behavior) versus sin or evil.

Let’s get rid of the turn signal analogy. It’s a false comparison.

The same is true of the racism charge. Yes, racism is sinful and evil–but only when it’s acted upon and hurts others. Thoughts are not crimes. They will be judged by God alone one day (1 Corinthians 4:5). This is why “hate crimes” is a very dangerous and mis-leading term. Hate in your mind or words is not a crime.

But hurting or killing another person is.

Evil acts. It commits crimes (sins) that hurt someone else. Human governments are commanded to punish and restrain those sins ( e.g. Romans 13:1-7).

The main reason for “hate crimes” is to one day use it to lock up those who don’t agree with the dictatorship (such as Christians in a communist society).

I agree that President Trump, in his initial remarks, should have more specifically blamed pro-Nazi, white supremacist groups for the carnage in Virginia. It was a lunatic Nazi-sympathizer named James Alex Fields that cruelly used his car to kill Heather Heyer and hurt many others. He earns the title of a domestic terrorist.

But what he did was sin–the pure evil of taking human innocent life.

“Racism is evil. And those who cause violence in its name are criminals and thugs, including the KKK, neo-Nazis, white supremacists, and other hate groups that are repugnant to everything we hold dear as Americans.”

So racism was the backdrop, and left and right served as a confusing smokescreen. But murder and assault were the crimes (evil).

Former Arkansas Governor Mike Huckabee gave the best analogy of why racist crimes are on the rise.

“Back in the 1940s, a new technology swept America’s kitchens: the pressure cooker. In those pre-microwave days, pressure cookers were a miracle. They cooked food faster and with less energy because the heat couldn’t escape. Instead, a lid was clamped down tight. All the steam that might have been blown off if the system was open was held in. It was a great way to cook food, but there was one drawback: at the first crack or weak spot, there was a very real danger that the whole thing could explode like a bomb. Today’s pressure cookers have safety features to prevent that, but if ignored, the results can still be deadly. Recall that the Boston Marathon bombings were carried out with pressure cookers.”

“Over the past few years, several small but loud factions of society have been trying to turn America from an open system into a pressure cooker, and the explosions of rage and violence in Berkeley, Dallas, Charlottesville and other places are the result. The Founders knew that there would always be clashing ideas, and the best way to deal with them was a free marketplace where everyone could express and defend his views, and the best would be adopted while inferior ideas were exposed and rejected. America hasn’t always gotten things right, but thanks to free and open debate, we have consistently gotten things better.”

“But why should people be allowed to express bad ideas? Because when they express them in the open, they have to defend them. Maybe they can be reasoned into seeing the error of their ways. In fact, that’s a large part of the history of America: bad ideas that used to be taken for granted are now seen as abhorrent, because good ideas won out. We used to be a nation where people who disagreed could sit down, have a spirited discussion, and maybe end up by seeing things from the other person’s perspective. Ban the open discussion, tell some people their perspective is invalid and they have no right to express it, and you’ll end up with a barroom brawl instead.”

“We should all be doing everything we can to reduce the heat, release the pressure, let the steam out and open up the system to more dialogue and discussion between people of different backgrounds and viewpoints.”

Frederick Douglass, the famous African-American abolitionist agreed. As explained by Lucas Morel, Professor of Politics at Washington and Lee University:

“Frederick Douglass was no fan of ‘race pride,’ counting it a ‘positive evil’ and a ‘false foundation.’ For the better past of American history, black Americans wanted nothing to do with a color line that set them apart from other Americans. ‘It has long been the desire of our enemies,’ Douglass wrote, ‘to deepen and widen the line of separation between the white and colored people of this country.’ For Douglass, the other relevant minority in America was the minority of one–the individual. The government of all should be partial to none.”

“The politics of identity make the present the prisoner of the past, with individuals viewed chiefly through the lens of race or other arbitrary characteristics. Douglass argued for identifying with America–with the nation founded on ‘human brotherhood and the self-evident truths of liberty and equality.’ He saw that the protection of specific groups or classes would lead government away from protecting individual rights and towards assigning benefits and burdens.”

“‘I know of no rights of race,’ Douglass said, ‘superior to the rights of humanity.'”

Let’s not blame identity politics for our problems. Let’s not form a false dichotomy between right and left. Let’s not tolerate violence in any form (in the spirit of MLK).

Repenting of those sins is a first step toward American renewal.