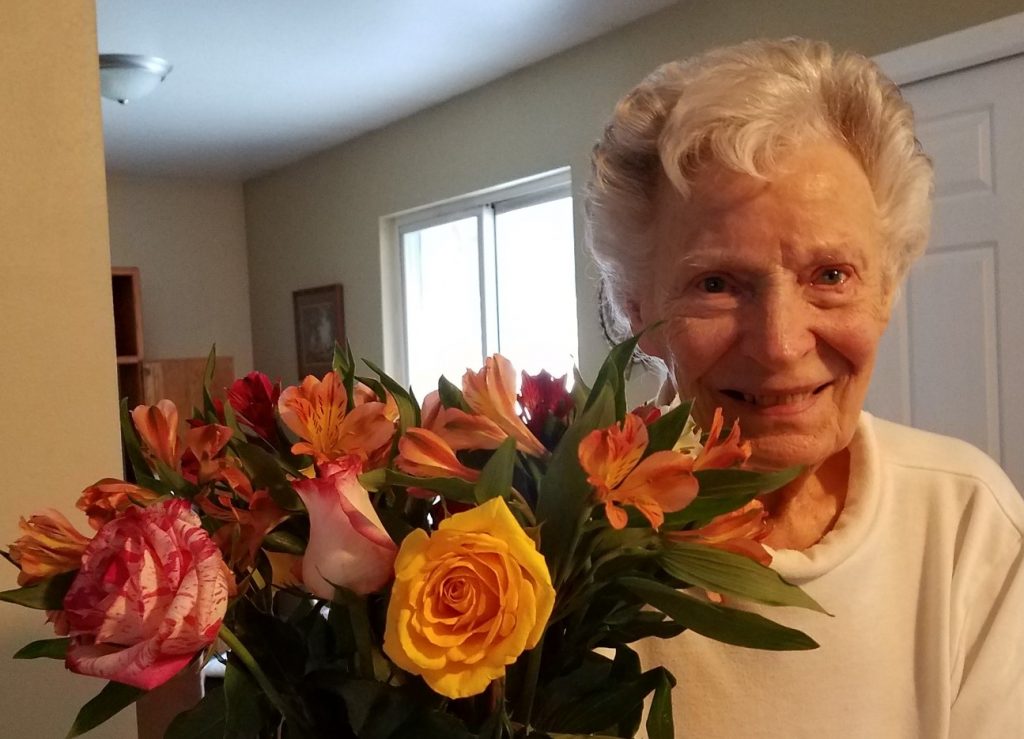 Margaret Irene Cookson, Shirley’s mother, passed away last night on December 6 at Hospice House in Tacoma, Washington. I spent two hours with her before she passed–thanking God that he would soon usher her into the arms of Jesus and a glorious time of reunion.

Mothers are the most important people on earth–imparting their lives and love to their children and extended family.

We miss you, Irene. But we know you’ve just experienced the greatest day of your life.

All because of Jesus.

A Tribute to Margaret Irene Cookson

The era was called “The Roaring Twenties,” but things were not “roaring” in the agricultural south. Roy worked for $1 a day in the fields, and moved the family to Arkansas for a time to put food on the table–then back to Parsons.

Margaret was a spitfire early on, often standing up for her older sister when she was bullied for a speech impediment.

When the Depression and “Dustbowl” hit during the girls’ teenage years, Roy traveled to Bremerton, Washington, to find work in the shipyard. Margaret joined him in 1942 at the age of fifteen, with Jesse and Rosalie joining them soon after.

Margaret graduated from Bremerton High on June 9, 1942 at seventeen because she skipped a year (the Kansas school system was better than Washington).

Following our victory in World War II, the attractive, hard-working bookkeeper fell in love with tall, dark, and handsome Charles “Chuck” Cookson, co-owner of Cookson’s Texaco in downtown Port Orchard. They married in 1950 and move into an upstairs apartment overlooking Sinclair Inlet–just one hundred yards from the station.

Their marriage lasted sixty-seven years–all spent in that six hundred square foot apartment. It was a simple, hard-working life devoted to their business, family, church–and Margaret going to the beauty shop. For decades, she maintained her beautiful hairstyle through a weekly appointment with her hairdresser.

Margaret, known locally as  “Maggie” or “Mag” by close friends, was told by doctors she could never have children. On February 26, 1952, Shirley Jean–my wife–was born to the extremely grateful parents. As their only child, she became their pride and joy.

I always said God created Shirley specially for me. The truth is, I was way down the line in their close extended family.

Margaret did the books for Cookson’s Texaco with exacting detail. She complained regularly that the candy sales were in the red because big-hearted Chuck gave them away to precocious children. Some years she got so sick of bookkeeping she erupted: “I’m going to throw all these ledgers into the bay (across the street).

Chuck would reply with a smile, “Bookkeeping keeps your mind sharp.”

It also kept her tongue sharp because Margaret Irene always spoke her mind–which she saw as the truth.

That ended most debates.

In the 1960s, the young Cookson family began attending First Christian Church, located only about six blocks from their apartment. In 1964, all three were baptized under the energetic preaching of Pastor Jack McDaniel. Maggie later served on the Worship Committee, and at her passing, was the second longest standing member at FCC (after Don and Lois Morrison).

I met Margaret in 1975 when Shirley and I started dating, joined YWAM, and were married in 1976. Early on I started calling her “Irene” during humorous banter. I then tweaked it to “Feisty Irene”–which she seemed to enjoy (I think). She called me “Ronnie B.” I often reminded her that I was her favorite son-in-law.

Margaret and I kept up the banter all of her life. In 2014 after she broke her leg, I visited her in rehab and told her I had a new name for her current hairdo: Roadkill. With that, she feistily disowned me as her favorite son-in-law (just kidding).

Margaret Irene never returned to Kansas. But on January 16-20, 1996, I flew to Parsons to speak at a city-wide Revive America Seminar hosted by twenty four churches. During the day I checked out her old haunts and even tried unsuccessfully to find the names of some relatives at a local cemetery (there was too much snow on the ground).

During the evenings, God moved in power and I wrote in my journal:

During the final Sunday evening service, God came down among us in a packed-out Wesleyan Church where Dean Sherman gave the final message. Crowds overflowed into the foyer, the choir loft, and sat on metal chairs in the aisles.

The time of communion and covenant signing was electrifying. At the close, forty pastors and associates came forward, spoke encouraging words to their people, and prayed. Parsons was deeply touched by God.

I was greatly blessed to visit Margaret Irene’s childhood home.

After sixty-seven years of marriage in one apartment, Chuck graduated to heaven in 2017. Six months later, Maggie developed stress fractures in her back from coughing and then accidently burned herself with a heating pad. She came to live with us in March 2018, and we enjoyed her close company for nearly five years.

She lived most of her nineties in our family room, curled up in her favorite chair, talking to Shirley and occasional guests and watching Andy Griffith and The Carol Burnett Show. She always lit up when family members came for a “visit.”

During her final year, she began to experience “horrific” pain (her word) in her lower extremities. On Saturday, December 3, she fell onto the carpet near her chair and had to be ambulanced to St. Anthony’s Hospital with a broken hip. That only increased the pain in her body, and it took two days to bring it under control.

Shirley shared some tender moments with her mom in the hospital agonizing over her pain and both of them loving on one another profusely. I also spoke to her tenderly and let her know that she was “going home” and that we would meet her in paradise one day. I explained to her, “When we are in glory, I won’t have my pride and you won’t be feisty anymore.” She then asked me to come close, looked into my eyes and said, “Ronnie B, can’t I be a little feisty in heaven?”

We both teared up and I told her the Lord could handle that.

When we were leaving, I tried to bring one more smile to her face and quipped, “I’m going home to eat some of your chocolate cookies” As we headed out the door, she weakly called me back to her side and whispered in my ear.

I lost that debate.

Irene spent just one night at Hospice House in Tacoma. I was there when she arrived at 10 PM Sunday evening and spent some final hours with her Monday afternoon praying in her room and looking forward to her graduation to heaven. A couple hours later, she experienced eternal glory.

All because of Jesus.

I read Jesus’ amazing words in John 11 in my normal devotions this week. He was speaking to Martha, a hard-working homemaker just like Margaret–when he exclaimed:

Martha did.  Margaret Irene did too.

And even though we miss her, heaven is enlarged and a little feistier today–because of the hope we have in Jesus Christ.