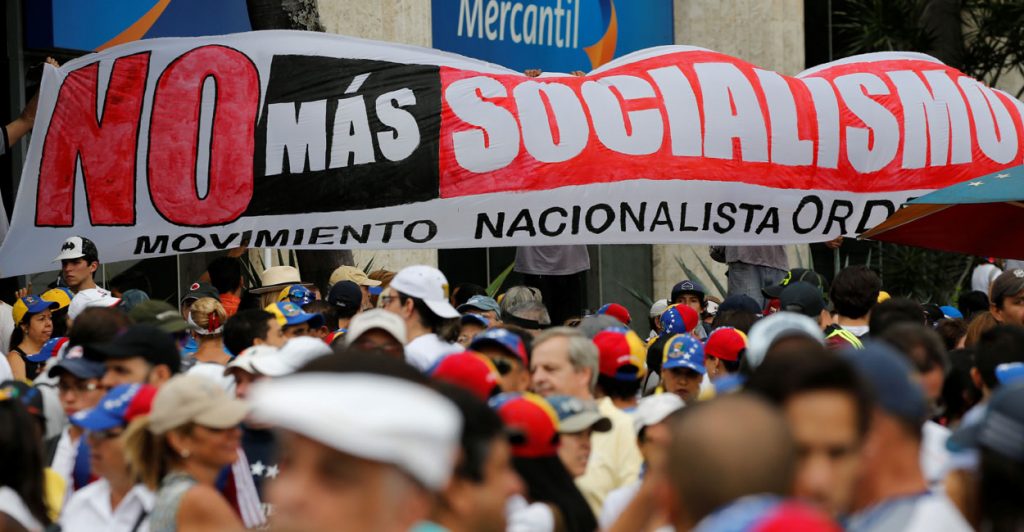 It appears that “socialism” stands at the forefront of the 2020 election with a multitude of Democratic hopefuls jumping into the race while espousing its tenets.

I detailed recently the naive absurdity of the “Green New Deal” popularized by New York Representative Alexandria Ocasio-Cortez.  Last week I shared my own eye-witness report on what socialism/communism does to cripple and impoverish nations.

So, why not do a “trilogy” on socialist philosophy that really gets to the bottom line?

There are clear cut reasons why capitalism works and socialism doesn’t.

First, let’s look at a recent analysis of the the “price” socialism might extract from the USA if progressive leaders get their way.

It comes from a leading American economist, Stephen Moore, senior fellow at the Heritage Foundation. He explains what will happen if Democrat Socialists are elected in coming years.

“Add it all up and the estimated 10-year cost of creating the Democratic-socialist utopia envisioned by the likes of Ocasio-Cortez, Sen. Bernie Sanders and other leaders of the Democratic Party reaches well north of $100 trillion.”

$100 trillion dollars. That’s FIVE times our current national debt and would most certainly collapse our economic system. But do not fear. These fearless leaders know whether to get the necessary “Monopoly” money.

Moore continues: “Who will be left to pay for the Democrats’ America when everything is ‘free’? To the extent that any of the Democrats currently running for president has offered an answer to this question, they’ve invariably claimed that they would finance their schemes by levying punitive taxes on ‘the wealthy.’ But even if you took every penny of income from every millionaire and billionaire in America, it wouldn’t even pay half the cost. Some say we will just put it on the federal credit card. President Obama took our national debt from $10 trillion to nearly $20 trillion, but that might be loose change compared to the new spending spree.”

“Ultimately, the burden of paying for this radical transformation of America would fall predominantly on the middle class, as usual. Just one example: Many Europeans pay gas taxes that are double what we pay in the United States. That’s part of the tab for their green energy policies that Democrats are eager to bring here. Anyone want to pay $5 a gallon to fill up?”

“The Democrats balked at spending $5.7 billion to protect American communities by securing the border, but they’re perfectly happy to mortgage our future by spending nearly 20,000 times that amount on their own utopian fantasies. We will all have everything we want, and our country will be bankrupt.”

All true because there are at least three reasons why socialism doesn’t work:

Let’s begin with worldview because ideas have consequences.

If you haven’t read my latest book, River of God: Where Religion Began and Why Grace and Love Will Triumph, now is the time to purchase a copy and take a crash course in today’s intellectual/religious battlefield. In the book, I compare the five views of God side-by-side in a pragmatic way.

Two of those views are in mortal combat over the future of America, the West, and maybe the world:

The biblical worldview (Judeo-Christian) accepts the reality that human beings are fallen, prone to selfishness, and need a Savior (Jesus Christ).

Fallen in a key truth about every human being.

The four other worldviews don’t believe it. In varying ways, they teach that people are good and perfectible. Secularists want us  to vote into office progressive politicians who will direct all us goody-goodies toward a utopian paradise.

There’s only one problem. It NEVER works because fallen people lie, cheat, fight, get lazy, and finally give in to dictators who oppress and impoverish them.

That is the real history of humankind the world over–especially in socialist societies who build their kingdoms on the false premise that humans are innately good.

On the other hand, the Western World, including the United States,  was built on the realities of the Fall, salvation, lawful restraints on evil, and growing good character that produces freedom and prosperity. Free enterprise capitalism is the economic expression of the biblical worldview. It works because it motivates people to overcome their fallenness through diligent work and the Golden Rule.

Which rationing mechanism do you want?

There will always be “limits” in our fallen world. Hard work is necessary to overcome it, and determines and motivates (rations) who gets what. If you work hard with integrity you’ll get ahead. If you are unwilling to do so, you suffer the consequences.

In the socialist world, bureaucrats do the rationing (with incredible corruption)–inflicting poverty on the masses.

Do we really want bureaucrats running our lives and nations?

“No wonder that, according to one poll, half of millennials say they would prefer to live under socialism rather than capitalism. Entitlement is all they and their parents and their grandparents have known. They think they are entitled to a free education, free health care, a job whether they want one or not, subsidized housing, and (who knows?) free pot.”

“No one has bothered to teach millennials the lessons of socialism, such as the tragic story of Venezuela. Once one of the wealthiest countries in Latin America, it is now ravaged by runaway inflation and massive government corruption and ruled with an iron fist by a socialist dictator.”

“No one has bothered to teach millennials about the miracle of India, which has switched from a broken socialist system to an expanding, neo-capitalist economy that has created a middle class of 300 million, the largest in the free world.”

“No one has bothered to teach millennials the first law of socialism—abolish private property. So, millennials, hand over your iPhone and iPad.”

“No one has bothered to teach young Americans that the second law of socialism is that religion is an opiate of the people and will be terminated. Instead, you will be obliged to worship Big Brother.”

“No one has bothered to teach millennials that neither Denmark nor Sweden is a socialist country, but have put their industries in the hands of entrepreneurs who live by the rules of a free market economy.”

As Ed Feulner and Brian Tracy wrote, in 1776 the American spirit—courageous, optimistic, enterprising, devout, generous, and devoted to liberty—gave rise to a novus ordo seclorum, a ‘new order for the ages’ that allowed ordinary men and women to chart their own destiny.

“It doesn’t help to put ‘Democratic’ before Socialism just like Republican or Democratic Capitalism doesn’t change anything either.”

“Capitalism is capitalism and socialism is socialism.”

“No fancy adjectives change those realities.”

There you have it. To summarize:  Socialism’s core idea about people is wrong. It corruptly rations and incentivizes the wrong things. And socialism ALWAYS produces tyranny.

On the other, free market capitalism recognizes mankind’s fallen state. It rations resources through hard work and caring for others. It ALWAYS produces greater character and higher degrees of prosperity.

Now you know why capitalism works and socialism doesn’t.

Take your knowledge, share it with others, and vote.