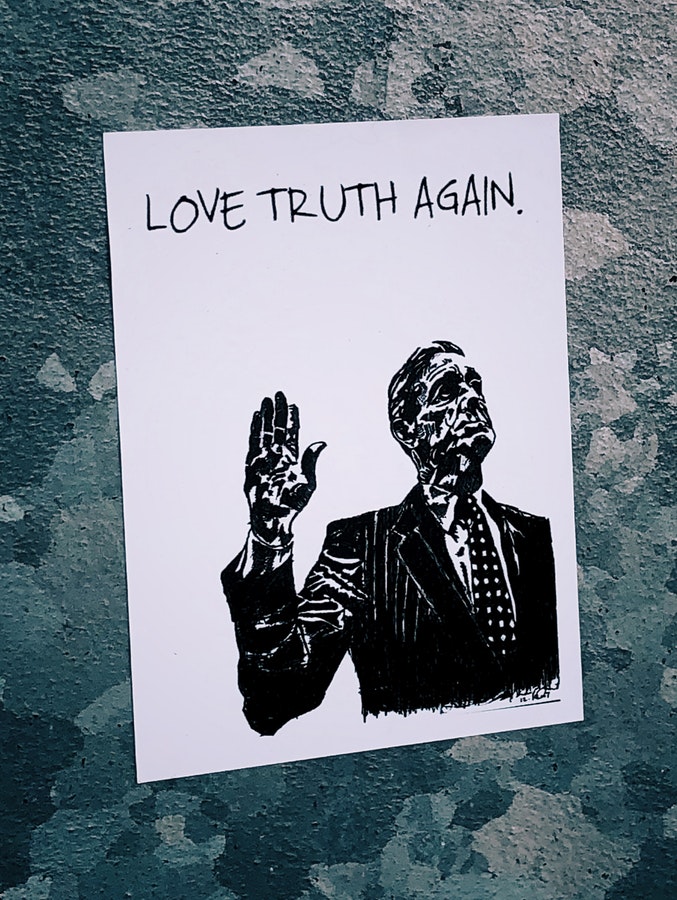 The Mueller Report was delivered Friday to Attorney General Bob Barr who announced over the weekend that no Russia collusion was found in the Trump campaign.

What’s the biggest lesson we can learn from this waste of taxpayer money?

That the explosion of lies in the 21st century threatens our entire civilization. When listening to many leaders, as well as their interpreters in the mainstream media, we might do well to practice one simply idea.

I have written many articles on the growing crescendo of lies and deception.

Lies are not new–they started in the Garden of Eden. The voice behind the snake came from Lucifer–a fallen angel that Jesus said was a “liar from the beginning and and the father of lies” (John 8:44).

My life was altered by a lie. I share that story in the first chapter of my book River of God: Where Religion Began and Why Grace and Love Will Triumph. That lie ripped apart my family and sent my dad to prison for three years–unjustly.

The breadth of lying, the decay of the biblical “truth base” of Western culture, and the amplification of global media have brought us to a point where nations and even the world could be led astray–evidenced by progressive deep-staters, politicians and media allies who attempted to bring down Donald Trump–with lies.

They failed. For now. But this brazen attempt must stir us to cry out to God for a revival of truth and warn us to be careful about those we trust.

“Secular progressivism has gotten us to a point where the truth is fluid because in the absence of absolutes–nothing is really right or wrong–it’s a matter of how you define your truth. This ideology is dismantling our culture.”

Some months ago I began an article called “Believe the Opposite” focusing on the problem of lies. Today, I ran across a piece from Dennis Prager which caused me to pause my own writing and direct you to his.

I can’t say it better than Dennis. Here is his article in its entirety.

“From the beginning, I repeatedly said the charge that the Trump campaign colluded with the Russian government to defeat Hillary Clinton in the 2016 presidential election was a lie. The president’s description of it as a ‘witch hunt’ was accurate.”

“I regularly acknowledged that I was putting my credibility on the line by stating that it was all a hoax. But how did I know that? After all, I wasn’t privy to any confidential intelligence.”

“One answer is I used common sense. The Trump-Russia collusion charge and the Donald-Trump-is-an-agent-of-the-Kremlin charge struck me—and tens of millions of other Americans—as absurd. Vladimir Putin’s influence on the 2016 election was negligible, and as president, Trump has been harder on Russia—in supporting Ukraine’s anti-Russian government, in fighting Syria’s pro-Russian government, and in confronting Iran’s pro-Russian regime—than Barack Obama was.”

“But the biggest reason I never believed the Russian collusion charge was that the charge emanated from the left. And the left lies about everything. Truth is a liberal value, and truth is a conservative value, but it has never been a left-wing value. People on the left say whatever advances their immediate agenda. Power is their moral lodestar; therefore, truth is always subservient to it.”

“The left wanted to undo the 2016 presidential election from the day Trump won. So it made up the Russian collusion story. This was obvious to every conservative—except for ‘Never Trumpers,’ who, with regard to Trump, have been indistinguishable from the left and were therefore as prepared as any leftist to believe the Trump-Russia collusion tale. We conservatives knew that a) the left wanted to invalidate the election and b) the left lies when it is in its interest to do so. So we knew the collusion charge was a fabrication.”

“We also suspected that the collusion hoax may well have been an effort to divert attention from the real crimes here: American intelligence agencies being used to spy on a presidential candidate for the first time in American history; getting Clinton off the hook for her illegal use of a private server while secretary of state; her use of that office to enrich herself and her husband; and her destruction of the evidence once her hidden emails were subpoenaed.”

“If you always doubt a leftist claim, you will almost always be closer to the truth. I employed that rule in concluding the collusion story was a fraud, and it served me well.”

“Name the issue and you will likely find a left-wing lie. The left claims our universities are saturated by a ‘culture of rape.’ Not only is that a lie, but deep down, leftists know it’s a lie. The proof? Every left-wing parent who speaks about the ‘culture of rape’ on college campuses sends his or her daughter to college.”

“Although I haven’t been a student or taught at a college in many decades, that’s how I knew American colleges were not rape cultures. I knew it because the left said they were. Again, just assume the left is lying and you will be close to arriving at the truth.”

“Last week, a writer for the left-wing magazine The Nation defended the victory of two high school male-bodied trans women who defeated all the female-bodied women in a Connecticut track competition—because, in his words, ‘trans women are in fact women.’”

“Now, we all know trans women are not in fact women, that they are biologically men who regard themselves as women. And in private life, I have no problem treating trans women as women if they look and dress female and take on a female name. But it is completely unjust to have them compete against born females in sports. They are not in fact women; they consider themselves women despite the facts. Again, assuming the left is lying to advance its agenda leads one to truth.”

“When the left tells us the Earth has 12 years left because of global warming, I assume it is not telling the truth. One bit of proof is that almost no one on the global-warming-will-destroy-life left advocates the safest, cheapest, and most practical non-fossil-based source of energy: nuclear power.”

“If they really believed life was existentially threatened by fossil-based fuel, they would be building nuclear reactors as fast as they could make them. One reason I haven’t believed man-made global warming will destroy the Earth is that the left does.”

“So, while the latest left-wing lie—Trump-Russia collusion—is now exposed, there is little to cheer about. Without missing a beat, the left—the Democratic Party, the media, and academia—will move on to another lie.”

“And there will be no soul-searching on the part of the media or the rest of the left.”

“Why won’t there be? Because no leftist acknowledges the collusion story was a lie.”

“Truth has never been a left-wing value. Like ‘gender,’ it is whatever you want it to be.”

And believe the opposite of the propaganda of the day.