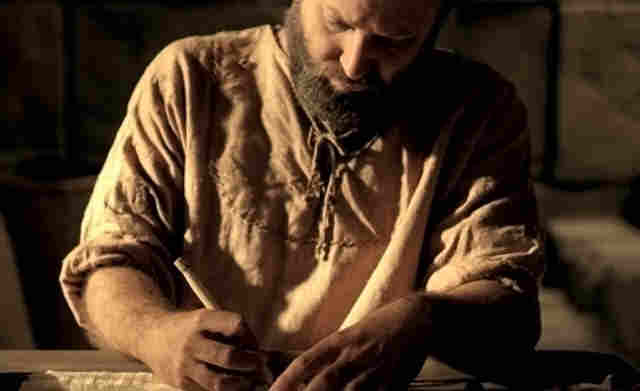 I’ve always been fascinated with the word “holy,” which is used to describe the utter uniqueness or other-worldliness of God. Holiness means that God is “different,” “pure,” and completely “outside the box” of our finite human imagination.

This view of God reminds me of C.S. Lewis’ description of Aslan, the Jesus figure, in the Chronicles of Narnia where Mr. Beaver reminds Susan:

To put it another way, God is very unusual and often does unusual things.

He even uses unusual messengers.

When we think about great figures in the Bible and/or history, we oftentimes romanticize their personalities or roles–failing to recognize just how unusual a messenger they appeared during their lifetime.

For a moment, let’s put on some fresh glasses and consider these unusual messengers from the Bible and history–up to the present day.

It’s hard to imagine Noah’s lush, vibrant, supernatural but fallen world where even a serpent spoke words to deceive our first parents.

God called Noah to build an immense boat–over a football field-and-a-half in length–on dry ground, nowhere near the sea. He and his family labored for over one hundred years putting together this reverse-Titanic to save mankind.

It had never rained on earth. How incredibly unusual and laughable this “message” must have appeared to the people of time. Then the Flood came, all but eight died, and God started the world over (Genesis 5-9).

We think of him as a towering figure–raised in Pharoah’s palace and destined for greatness. But, we forget his 40-year exile in Midian (“Desert Bible School”) where God beat the stuffing out of Moses’ pride and prepared him to be a humble national deliverer.

Can you imagine what the Hebrews thought when this dirty, lisping, “hick from the sticks” returned from Midian (Exodus 4:11-31) to announce he would lead two million people away from the greatest power on earth? They must have laughed or at least snickered. Moses even possessed a walking stick that turned into a snake.

One of the Old Testament’s most powerful “judges” whom God chose to save his people (Judges 13-16). But Samson struggled with a problem–a moral one. He’s stands out as our first historical playboy-type who couldn’t keep his pants up around beautiful women. It cost him his judgeship for a awhile and eventually his life.

Yet, God used the promise of Nazarite hair growth and a great dose of humility to propel Samson to slay 3000 Philistines in his last act of leadership (Judges 16:11-30).

Balaam and his donkey

We find two unusual messengers in this story. The first is the second animal in the Bible (after the serpent) who was given a human voice to warn Balaam that he  better pay attention.  A donkey rebuked the impatient prophet. That was humbling–and extremely unusual.

So was the choice of Balaam himself–the equivalent of a sooth-saying witch or sorcerer that God used to bring a message of doom to King Balak and a nation. Balaam appears to obey God and do what he’s told (Numbers 22-24). But Jude tells us there was more to the story of his divination and rebellious spirit. He brought God’s message–then died because of his own prophecy (Jude 11).

These famous biblical messengers reigned as powerful and cruel tyrants over two of the great civilizations of the Middle East–the Babylonian and Persian Empires. Nebuchanezzar lived as an animal for seven years because of pride, then emerged back into power to tell the known world to fear God and be humble (Daniel 4:28-37).

God used King Cyrus to announce and empower the return of the Jews to their land following their seventy year exile. This act of deliverance by a non-Jewish king was prophesied 150 years before it happened (Isaiah 44:26-28).

Both men were heathen rulers that God moved upon to direct history. Very unusual messengers.

Thousands of people streamed out of the cities and towns to listen to this rustic and crude preacher who lived on insects and honey. Talk about out of the ordinary. John not only looked like the wild man from Borneo, but used his thunderous and convicting voice to bring even Roman soldiers to repentance (Luke 3:7).

Other than Jesus Christ Himself, no one made more impact on the biblical transformation of the world than the missionary efforts and writings of Saul of Tarsus–the Apostle Paul. Paul wrote nearly half of the New Testament, and his gems laid the foundation for Christian Europe, the Magna Carta, the Reformation, civil societies, human rights, and the explosion of modern missions.

Yet, Paul started out as a firebrand persecutor of the Early Church. He was the last person you’d think God would use to impact the world through love (1 Corinthians 13). In fact, after his conversion, it took thirteen years for God to train and convince others that he was truly God’s peaceful messenger. Quite a reversal.

I love his story because after being taken into slavery in Ireland, then escaping back to his English homeland, Patricius hears the voice of God telling him to go back to the scene of his slavery, hunger, and impoverishment and bring the Good News of Jesus Christ to the Irish people.

What irony. You’d think that Ireland would be the last place where Patrick wanted to set foot. But God had plans for this 5th century A.D. missionary bishop.

Can you imagine the stunning choice of a tiny Albanian nun being called by God to reach out to the world’s second largest nation (India) as God’s messenger of healing and compassion?

When Mother Theresa spoke at the National Prayer Breakfast on February 3, 1994 in Washington, D.C., she stood out as the shortest person in the room with the biggest voice in the land. She even shamed the president of the United States into recognizing the evil of abortion.

Just last week, President Donald Trump delivered the most powerful Easter message I have ever heard from a U.S. president in my lifetime. You really need to watch this ninety second proclamation of the truth about Easter and Jesus’ resurrection.

Many things stand out in the video. First, President Trump seems comfortable talking about God–despite his playboy past and often gruff spirit. He states “Christ is risen” as the FACT that it is (let the ACLU grovel) and explains how God has redeemed the world through His love.

Talk about an unusual messenger.

But don’t miss the message.

God also uses unusual methods, circumstances, and timing to work His will in our lives. My career calling came out of meditation on the shores of a beach.  God motivated a junior high basketball coach to lead me to the Savior. He directed a stranger to call me one year with encouragement that was desperately needed.

I’ve heard His voice through sunsets, songs, and the lives of many wonderful people.

Last week a friend told me that he spotted a bird that encouraged him to pray for his aching back. God healed him instantly. I told him maybe the bird was an angel. After all, the main meaning of “angel” is “messenger” (Hebrews 1:7).

Now, think about your own life–and the unusual ways God has gotten your attention, spoke into your life, or directed your destiny–even through testing and trials (James 1:2,3).

How did I pick this topic today? I got up this morning and asked God what I should write. In almost a dictation manner, he poured these thoughts into my mind which I now share with you.

Now it’s your turn. Let a holy and extremely unusual God speak to you and direct your path this day. Listen for voice in all things.

And be open to His unusual messengers.

Posted in Christianity, General, Leadership, Religion and tagged Donald Trump, Messengers
← The Permanent Victory of Jesus’ Death and ResurrectionDevil Take the Youngest and Our Crisis of Meaning →