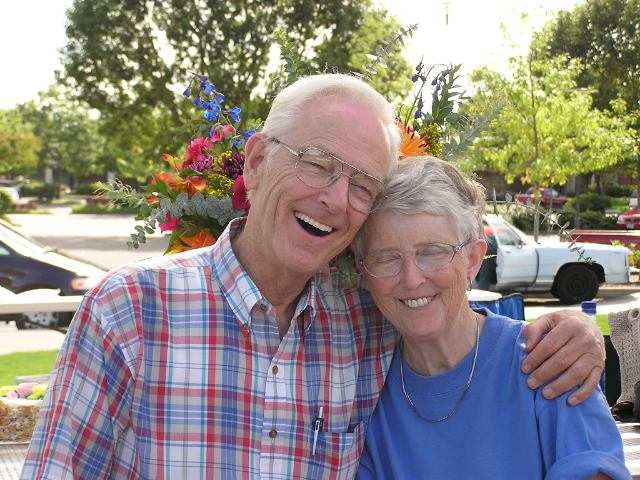 Saturday afternoon I received a call from a daughter of my teenage pastor. She informed me that her beloved father–Steve Watkins–had passed away and was now in the presence of Jesus (Philippians 1:23).

I was sad for our great loss, but also happy because of his graduation to glory.

“Pastor Steve,” as most of us called him, was an important spiritual father to many and a link in the chain of salvation that stretches to the nation of Mongolia.

Here is our story–and why spiritual fathers are so needed in our lives.

The Blessing of Spiritual Fathers

Howard Hendricks wisely points out that we need three people in our lives. We need a Barnabas to lift us up. Barnabas was known for his gift of encouragement in the Early Church. He championed others with his warmth, selflessness, and elevation of others.

Can you think of a “Barnabas” whose encouragement benefited you at key points in your life?

Hendricks also says we need a Timothy–a spiritual son or daughter–to whom to impart our faith, knowledge, love, example, and character. During the King’s Kids years, we told our young missionaries to find a “Timothy or a Tina” to guide in the faith.

I count it a privilege to have many spiritual children, both locally and around the world. Do you have your own spiritual Timothy or Tina?

Most importantly, Hendricks says we need a Paul–a spiritual father–people who represent the father heart and guidance of God to help mold our lives.

Pastor Steve was a major “Paul” in my life. I needed him because my own earthly father was unjustly in prison for most of my high school years. And my basketball coach who led me to faith in Christ, later committed adultery, divorced two wives, and walked away from his faith.

Enter Pastor Steve. the shepherd of Harper Evangelical Free Church, Port Orchard, Washington. We first met in 1970 when I began attending his church because there were some cute girls in the youth group (and other reasons). Steve had a gregarious laugh, a love and devotion to the Bible, and a deep commitment to young people to grow in their faith.

He and his wife Donna opened their home every Sunday evening for the youth to “hang out” (before the term was coined). Many thronged their small parsonage next to the sanctuary seeking a sense of belonging, laughter, singing, fellowship, Bible study, and gulping down hot “Tang.”

Donna doted on us as a no-nonsense compliment to Steve. They became a wonderful “mom and dad” to a generation of young people.

For the remainder of high school, Pastor Steve acted as a faithful father figure who encouraged me to grow in my faith, supported my call, and released me to use my spiritual gifts. Though the congregation was more conservative than my eventual Youth With A Mission experience, Pastor Steve possessed the humility to know that Harper needed me and I them.

Spiritual fathers release God-given dreams even if they can’t relate to the details.

After I left the area to go into missions, Pastor Steve met with a group of my friends every Friday morning to continue their growth as disciples.

One of my fondest memories with Pastor Steve involved climbing some rickety stairs to the “Eagle’s Nest” during the early 1970’s. His pastoral study dominated the attic of the old church (where my maternal grandfather walked the beach in the 1940’s to attend services–in Swedish). In between some early YWAM assignments, I often dropped to my knees beside Pastor Steve, and we passionately prayed for people and the fulfilling of the Great Commission.

Those prayers would eventually take Steve and his wife to the ends of the earth.

Pastor Steve officiated Shirley’s and my wedding on October 10, 1976. Three hundred people packed Harper church, a Christian band flew in from Germany to play, (Jesus Revolution days) and we held a six hour reception at a new school “Commons” because it was the largest venue in town.

We asked Pastor Steve to preach the Gospel that special day while tying the knot. The photo below shows us signing the marriage license with him and our best man and maid-of-honor. 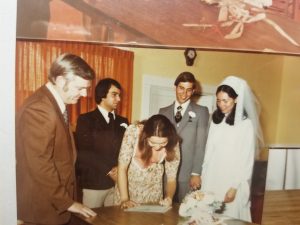 After Pastor Steve completed his tenure at Harper Church (and we went out with YWAM) he served in various churches in Montana and Oregon, and later became the superintendent of the Mountain District of the Evangelical Free Church where he became a spiritual father to pastors in the Northwest.

We stayed in touch and in prayer throughout those years.

Steve and Donna often visited us to offer encouragement. They drove into Washington, D.C. the day Shirley gave birth to our twins in 1983. (They watched our two-year-old at home while we “multiplied” our family.) In 1991 they dropped in to see us in Port Orchard as the biggest storm of a lifetime knocked out power for a week (and we shivered under blankets upstairs).

I guess spiritual parents love to visit their kids.

In 1975 Shirley and I took their son, Don, to Europe for a summer in missions. He stayed to do a YWAM school in Lausanne, Switzerland while Shirley was doing the same at a Bavarian castle in Germany. Twenty years later, Don encouraged his parents to join a church-planting team in Mongolia–and in their mid-sixties, they accepted the call.

There were few believers in Christ in the early 90’s and the nation still lay in the grip of communism and much poverty. But the Watkins went to work and helped establish one of the first churches in the nation–and became spiritual parents to many Mongols.

They were known as “SteveDonna” in Ulaanbaatar and a favorite stop for tea, talking about Jesus, and a spiritual oasis for weathering power outages and water shortages. Donna changed her email address to include “mongolheart”–and kept that focus until she went to heaven in 2012.

In 1997, Steve asked if I could bring a King’s Kids basketball team to Mongolia to share the Good News. We arrived in July, drank tea in their apartment, slept on the floor of the Sports Palace, and became friends with one of his disciples named Battulga. He was the most famous sports figure in Mongolia and coach of an MBA team who had won two national championships.

We became fast friends and played “basketball for Jesus” all over the nation for the next four years until his untimely death in 2001 at the age of thirty-nine. I promised him I would pick up the torch for the youth of Mongolia.

We have continued taking teams, doing outreaches, and sponsoring camps right up to the present–all because of Pastor Steve’s invite (and our prayers in the Eagle’s Nest).

I was present with Pastor Steve when he gave his “farewell message” in Mongolia in 2002 and continued to visit him and Donna in their retirement years. After Donna passed, Steve began taking daily prayer walks in Canby, Oregon collecting bottles and cans (with a small army of helpers) to turn in for money. He sent the proceeds to us for years–and we passed every cent on to reach Mongolian youth.

Thanks, Pastor Steve, for “fathering” us. We commit to follow your example.

Posted in Character, Discipleship, Family, General, Missions and tagged Howard Hendricks, Mongolia, Pastor Steve, Steve & Donna Watkins
← What the “D” Now Stands for Behind a Candidate’s NameWe Must Change the Language to Renew the Culture →