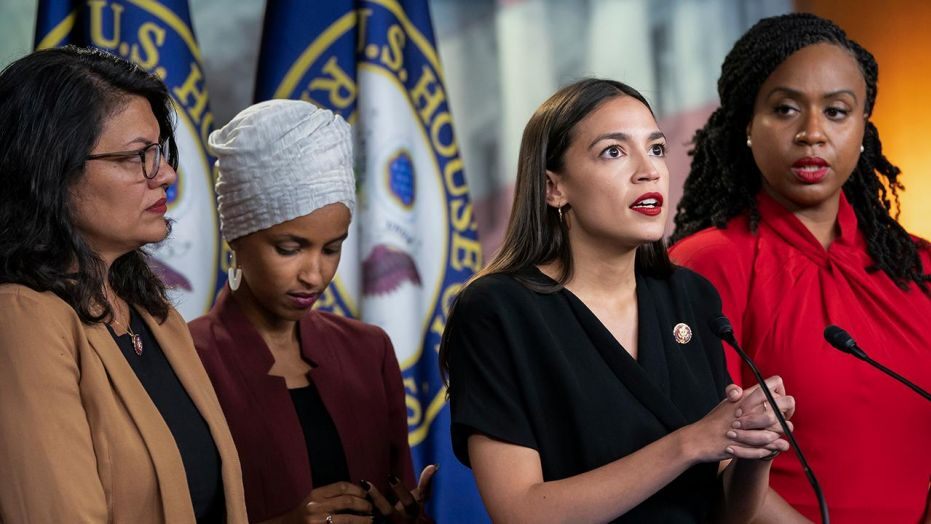 The most talked-about “squad” during the summer of 2019 is comprised of four freshmen Congresswomen that are becoming more famous (or infamous?) than the Fab Four.

That’s a reference to the Beatles for you who are young.

Is “The Squad” a warning from God?

Is the Squad a Warning from God?

The Squad is made up of Alexandria Ocasio-Cortez of New York, Ilhan Omar of Minnesota, Ayanna Pressley of Massachusetts and Rashida Tlaib of Michigan. They are young “Justice Democrats” who’ve waged a Twitter war with President Trump since they were elected in 2018.

What gave the four Congresswomen “The Squad” label in media circles were tweets President Trump sent out encouraging them to “go back to their country” of origin, solve the problems there, then return to share what they’d learned.

The four ladies and their allies pounced on the Twitter posts as racist, misogynistic and renewed their calls for impeachment.

The firestorm produced “the Squad.”

To set the record straight: 1) I don’t like President Trump’s personal attacks–he should stick to the issues, 2) The ladies and the press dishonestly portrayed his words as racist–they weren’t, and 3) I understand the president’s strategy to make the four women the new face of the Democratic Party.

They are–and it’s a warning.

They are a warning from God of things to come if we don’t humble ourselves and pray, and fight for faith and freedom in the world.

They remind me of  “The Four Horsemen of the Apocalypse”–or should we say “Four Horsewomen.”

In Revelation 6, John describes Jesus Christ opening the first four “seals of judgment” at the end of time. Although interpretations vary, the four riders are seen as symbolizing Conquest, War, Famine, and Death. The biblical vision is that the four horsemen are to bring a divine apocalypse (catastrophic destruction) upon the world as harbingers of the Last Judgment.

If the “Squad” gets their way to govern America through their extreme policies, the USA will collapse and the world will be thrust into turmoil–and be ripe for global tyranny.

That scenario could have happened in the 1940’s through Hitler and Hirohito–but faith and courage won. Also in the 20th century it reared its ugly head through the U.S.S.R.– but Pope John Paul, Ronald Reagan and Margaret Thatcher steered global politics into liberating many nations.

The truth is that tyranny is close at hand in every generation due to fallen human nature. It has prevailed nationally and regionally in many time periods and one day will ascend the globe. It’s possible we’ll face it in the 21st century–or 1000 years from now.

Only God knows–and he never tells.

But he does warn his people to be prepared while being “salt and light” in society.  Today, that means resisting the socialists (many of whom are communists or simply satanically inspired).

Lee Edwards of the Heritage Foundation warns us why in the “Most Telling Failures of Socialism.”

“One, socialism has never succeeded anywhere, including the Marxism-Leninism of the Soviet Union, the National Socialism of Nazi Germany, the Maoism of Communist China, the Chavez-Maduro socialism of Venezuela. It has never come close to anywhere near Marx’s ideal of a classless society.”

“Two, Marx has been wrong about nearly everything he predicted. The nation-state has not withered away. Capitalism didn’t break down as a result of the Industrial Revolution. Workers haven’t become revolutionaries but capitalists. The middle class hasn’t disappeared; indeed, it has expanded exponentially around the world. Marx’s attempt to use Hegel to create a ‘scientific socialism’ as been an abject failure.”

“Three, socialism denies the existence of an essential human trait—human nature. Marx borrowed from the Enlightenment to declare that human nature was malleable, not constant. Christian theology with its idea of a fixed God-given nature infuriated Marx. The socialist state established by Lenin tried for seven decades to create an entirely new human being—Soviet Man. In December 1991, Mikhail Gorbachev gave up trying and dissolved the world’s most spectacular failure in human engineering.”

“Four, socialism depends not upon the will of the people but on the dictatorship of the Party to remain in power. In The God That Failed, six famous Western intellectuals describe their journey into socialism and their exit when they encountered the gigantic gap between their vision of a socialist utopia and the totalitarian reality of the socialist state.”

“After visiting the Soviet Union, the French Nobel Laureate writer Andre Gide said: ‘I doubt where in any country in the world—not even in Hitler’s Germany—have the mind and spirit ever been less free, more bent, more terrorized and indeed vassalized than in the Soviet Union.’”

“What price socialism? The Chinese philosopher Lin Yutang listed the ‘little terrors’ that prevailed in China: ‘We lived in a world swarming with invisible eyes and ears.’ Given the ignorance of so many of our fellow, especially young, Americans, telling the truth about socialism has become an imperative: It is a pseudo-religion founded in pseudo-science and enforced by political tyranny.”

That’s where the “Squad” wants to take us.

Gary Randall, Julie Roys and Chuck Bentley give us five reasons why socialism is not biblical–and a very destructive idea.

1. It’s based on a materialistic world view.

“To socialists, all that really exists is the material world. This worldview obviously contradicts Christianity, which affirms the existence of both a material and a non-material, spiritual, world. Mankind’s problems are primarily spiritual not material.”

“Karl Marx never supported his wife and family, living off various forms of welfare. Aristotle noted that Men start revolutionary changes for reasons connected with their private lives. The Bible teaches that aid should be tied to responsibility–such as 1 Thessalonians 3:10 and 1 Timothy 5:10.”

“Candidate Barack Obama once famously defended socialism when a little girl asked him why he believed in it. He said: ‘We’ve got to make sure that people who have more money help the people who have less money. If you had a whole pizza and your friend had no pizza, would you give him a piece?’ Obama’s deception is the government forcing one person to give to the other, while biblical charity is one giving to another out of a spirit of generosity.”

4. It encourages envy and class warfare.

“Socialists demonize the rich, blaming society’s problems on them. In a capitalistic country, most of the wealthy did not steal it from the poor. The founders of Amazon, Microsoft, Boeing and others created products which produce wealth and provide thousands of jobs.”

5. It seeks to destroy marriage and family.

“Essentially socialism seeks to allow the state to replace the traditional family. In fact, Friedrich Engels (Karl Marx’s associate) said: “The single family ceases to be the the economic unit of society. Private housekeeping is transformed into a social industry. The care and education of the children becomes a matter for the state.”

I believe that God has allowed this little spat to erupt between the “Squad” and President Trump to give us fair warning. The ladies might be young, passionate, and made-for-TV, but their ideas are as old as the world’s first tyrants.

Let’s pray for them, vote them (and others like them) out of office in 2020, and seek the face of God for His forgiveness, wisdom, and power to extend his loving Kingdom.

Otherwise, the Four Horsewomen just may be saddling up for a very ominous ride.

Posted in Freedom, General, Judgment, Politics, Tyranny and tagged Four Horsemen, President Trump, Socialism, Squad
← What We Can Learn From the MachinesTwo Deaths, One Hope: In Memory of Tim Allen (1956-2019) →