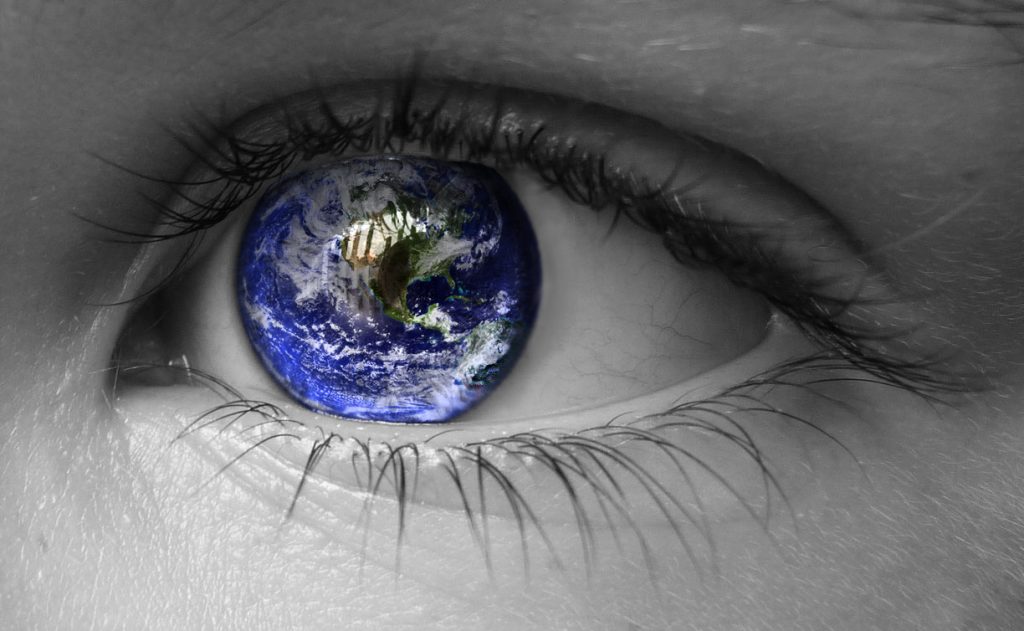 It’s interesting how many people divide life into sacred and secular–as if “reality”” can be parceled into two different sectors.

For example, many writers on politics and world affairs rarely mention God, His principles or His purposes. They talk about political parties, issues, national affairs, and  “worldly stuff” (secular)–as if God and His Kingdom don’t exist.

Others write about missions, prayer, world evangelism etc. and never seem to mention the things that are happening in the “world” that greatly affect these thrusts.

Here’s my perspective on the world–2018–from both a political and spiritual perspective. You can’t understand one without the other.

Though I’ve traveled to many nations,  I live in the U. S. and  admit an American bias as I look at the globe. We all see through lenses that are influenced by our localities, experience and knowledge.

Let’s “View the World” through the prism of the “Seven Spheres of Society” mentioned in Chapter Fifteen of my book The Fourth Wave:Taking Your Place in the New Era of Missions. They are:  1) The Family, 2) Government (law),  (3) Education, (4) Celebration (including arts, celebration and sports), 5) Public Communication (media), 6) Economy (business, science and technology), 7) Religion (church and mission).

I will also add three three other “domains” to bridge the gap between sacred and secular. Consider these ten areas as windows through which to perceive reality and act accordingly.

The family is in trouble in the United States and most of the Western World with birth rates in the U.S. low (2.06) and disastrous in Europe at 1.6–below the replacement rate. Europe is dying and, in some ways, could become “Eurabia” in two-or-three generations.

In America, many families are in trouble due to high divorce rates, single parent homes (70% in the African-American sector), and some millennials are turning away from the faith. Pray that God would use Ben Carson, head of HUD, to stimulate a revival of family life in America’s inner cities (Chicago, Baltimore and others) in concert with an awakened and growing urban Church.

Many nations in the world have stronger family bonds than we do. We must learn from there and bring back the beauty and blessing of the God-ordained nuclear family.

I will grade President Trump’s first year in office soon, but still make a few observations here. Despite an all-out assault to discredit him and destroy his administration through a triad of secular forces (Democrat Party, progressive media, and the Deep State), Trump has emerged as the most conservative, freedom-loving national leader since Ronald Reagan–with one commentator pointing out 81 major achievements in his first 12 months in office.

Yes, there’s been a learning curve, but Donald Trump has succeeded at blocking and beginning to reverse the secular-progressive takeover of the world’s free-est nation with constitutionalist judges, slashing burdensome regulations, and restoring America’s leadership in the world.

Let’s pray for the people revolution in Iran to topple Islamo-Fascism in the world’s largest sponsor of terror. Let’s also intercede for a diplomatic re-unification of the Korean Peninsula (without war). Both are possible in 2018.

Education is in trouble in the West as secular values increasingly create bathroom problems, gender confusion, and the multi-culturalism-hatred of “White Privilege.” Many universities have been taken over by radicals and snowflakes who need “safe spaces” from competing ideas. Secular tyranny in education must be faced and defeated.

Help is on the way through Betsy DeVos and the Department of Education’s emphasis on charter schools, school vouchers and choice, and a coming revival in higher ed. (I teach at a university where both the numbers and the spiritual temperature are rising. There a many more.) Internet education allows us to “teach the world.” We must pray for a godly education explosion in every nation.

Celebration (including arts, entertainment and sports)

Sports: The National Football League plummeted in ratings this season because some players protested “social justice” and stood behind the dis-credited Black Lives Matter movement. Americans voted against them with their remotes and season tickets. The main teams that dissed the national anthem (Seattle Seahawks, San Francisco 49ers, and Oakland Raiders) all missed the playoffs, and Seattle coach Pete Carroll admitted this week that the protests “took a toll.”

Good. Keep your politics off the field. I’ve really enjoyed watching college football this year where 120 universities with young, energetic, non-spoiled athletes are fighting for a national championship. Refreshing!  I hope the NFL keeps the teams in the locker room next season. Better yet: NFL athletes–Change (Repent).

Entertainment: It’s encouraging that the fall of Hollywood mogul Harvey Weinstein ignited a national cleansing of sexual harassment and rape which was covered up for decades in the entertainment, government, and business  worlds.  “Light” has brought “heat” and many firings–and that will continue this year. Let’s pray that the focus on sexual sin goes much further, exposing the pandemic of fornication (sex before marriage), adultery (unfaithfulness in marriage), and homosexuality (re-defining  marriage).

Purity and godly marriages would bring great blessings to billions around the world. Let’s pray for more heat and light–everywhere.

Fake News is now the norm in many nations, including the United States, for the purpose of promoting ideology and tyranny. Praise God for its expose this past year which has begun to recede the tide of lies.

Jarrett Stepman of the Daily Caller wrote an excellent piece on “The History of Fake News” that is worth looking at. He points out that no matter how much we hate the manipulating bias of the liberal media and what it’s doing to our nation, we must always trust in freedom and truth to prevail–and especially keep the power of  propaganda away from the instrument of government.

The American economy is starting to boom under the free-market principles of the new Administration. The recently-passed Republican tax cuts could usher in the greatest period of economic growth in the United States since the 1980s–and other nations will have to follow suit to compete. The 20 trillion dollar deficit is an ongoing concern, but fiscal restraint and growth will help.

It was free enterprise capitalism that created the world’s middle class–and remains the key to elevating nations out of poverty. Science and technology are poised to either destroy the world or heal and bless it. Pray for faith and character among both the business people and scientists of the world.

The Church exploded in the Southern Hemisphere and Asia in the past fifty years and has propelled much of civilizational development for the past two hundred. The Great Commission is within reach and we must press on to share Christ with every person in the world. YWAM’s Loren Cunningham is asking the Church to End Bible Poverty Now by putting the Scriptures in every language by 2020.

The Bible and faith/evangelism could bring billions to Christ in the coming years.

Israel celebrates its 50th anniversary as a nation on May 14, 2018. That’s a God-thing. President Trump’s moving our embassy to Jerusalem is both a fulfillment of prophecy and possibly a sign. The Bible says that one day “all Israel will be saved” (Romans 11:26). Are we on the verge of that reality and what it means to world history? Will you pray for the “peace of Jerusalem?” (Psalm 122:6).

Satan and His Demons

We must never forget that behind the evil in this world are dark, spiritual beings who are trying to kill and destroy us (Ephesians 6:12). They lurk in all the spheres of society, spewing lies and trying to enslave human beings.

Be aware of them–and bind them!-over evil government and private sector lies and manipulations. Satan is the real power behind false religions, global terrorism, murder and sexual debauchery. My new book–out next month–River of God: Where Religion Began and How Grace and Love Will Triumph–explains in great detail the spiritual/worldview battle we’re facing and how we must win it.

The Kingdom of God

In 2018, I see hundreds of millions of “wheat” rising in the world to join God’s eternal Kingdom of light and love. (Get on the call2all email list to stay informed.) I also see millions of “weeds” fighting desperately against that Kingdom and spreading evil all over the earth.

It is the greatest and most sobering time in history. But don’t be afraid. Live by faith, hope, and love (1 Corinthians 13:13).

God and His kingdom will be victorious.

“Lord Jesus, we pray that your Kingdom will arrive in great power and majesty in 2018. Start in my heart and light a candle of revival that will spread to the ends of the earth. Your Kingdom come. Your will be done on earth as it is in heaven” (Matthew 6:10).

Posted in Education, Family, General, Israel, Missions, Prayer and tagged Sacred and Secular, Spheres of Society
← How the Birth of Jesus Christ Changed the WorldIt’s Not About Trump–It Never Was →