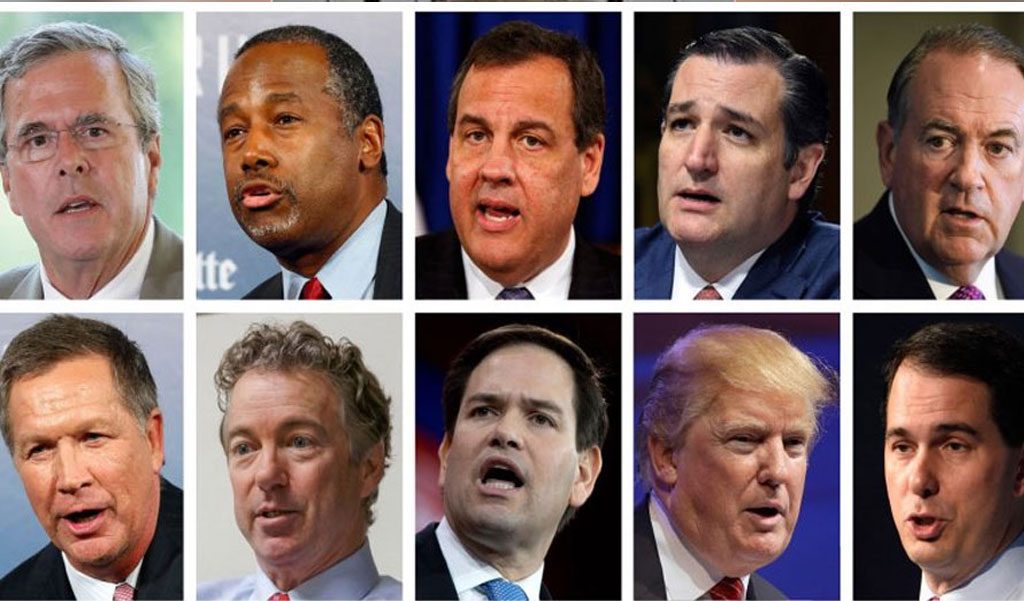 It was the biggest debate audience in history.

Thus it earns the title of the “Great Debate.” My wife and I actually settled in for both debates–first with the seven lower-polling candidates at 2 pm and then with the top ten at 6.

Here’s my graded take on the Great Debate.

I’m sure we all have first impressions after watching a debate format. Because we’re different people, we’re drawn to various styles, positions, or even shenanigans that either elevate or lower candidates in our eyes.

No two people see a debate the same way.

But not this time. His beef was that Fox News turned “liberal” in this debate to gain stature with the mainstream media. He thought the commentators asked demeaning questions of the candidates and, in general, acted like liberal potentates.

I disagree. I appreciated Bret Baier, Megyn Kelley, and Chris Wallace asking a number of candidates questions about their perceived areas of weakness. For Donald Trump it was “women.” For Jeb Bush it was Common Core.  For Scott Walker it was his change of position on immigration etc.

That was a shrewd move–to watch them act under pressure and answer tough questions. If they rise to become president of the United States, the questions and decisions only get tougher.

I give Fox News a B+ though Megyn Kelley is an ardent feminist and liberal on most social issues and Chris Wallace seems to carry a bit of his father’s liberal bias honed at CBS News. Overall, they did a great job and the ratings back that up.

Now let’s grade the candidates and conclude with a few thoughts on the pivotal 2016 race.

I know that the former CEO of Hewlett-Packard was in the first debate, but I agree with many that she really raised her stock (9% in the Rasmussen poll). She’s sincere, articulate, has strong character and principles, and is a Washington outsider.

Every time I ‘ve heard her speak over the past few months, I’ve turned to my wife and said, “She’s really good!” It was the same in the opening card of the Great Debate night. I would love to see her debate Hillary Clinton mana a mana (two females hand to hand!).

Besides seeing her in the Oval Office as the first woman president, I think she would make an excellent VP candidate if she doesn’t get the nomination.

Another political outsider, former neurosurgeon Ben Carson was also solid in the debate though he was somewhat neglected by the Fox moderators and is more cerebral in personality. But in faith, character, and world view he is as good as they get–even suggesting we change the tax code to model the biblical idea of tithing. What a concept–that God might be smarter than us!

On the subject of national security Carson said, “We’ve gotten into this mindset of fighting politically correct wars. There’s no such thing as a politically correct war. The left, of course, will say I don’t believe in fighting stupid wars. And what we have to remember is we want to utilize the tremendous intellect we have in the military to win wars.”

If Carson fails in the nomination attempt, he would also make an intriguing VP to appeal to and help un-brainwash (no pun intended) minority voters who think that progressive policies help them. They don’t.

Marco Rubio and Ted Cruz – B+

Let’s list the two junior Hispanic-background senators together because I feel they did equally well in the Great Debate. Both are eloquent speakers and stand out for that gift. As young candidates in the field–both in their forties–they are the future and could become great leaders.  Only God knows the time.

Rubio was as clear on abortion: “Future generations will look back at this history of our country and call us barbarians for murdering millions of babies who we never gave the chance to live.”

One of these men will be a future Hispanic president.

Some of you might think this too high a rating, but the more I hear Bush, the more I like him. It’s actually quite stupid to judge him by his last name. Names have nothing to do with anything. He’s a separate and distinct human being who probably holds the best governor record among a sterling class of candidates.

Bush is thoughtful, respectful, detailed and clear (very presidential). He also answered the critics on his liking of Common Core: “I don’t think the government should be involved in the creation of standards directly or indirectly, the creation of curriculum or content. … If we are going to compete in the world we’re in today, there’s no possible way we can do it with lowering expectations and dumbing down everything.”

Education improved greatly in Florida under his leadership. Results speak.

Forget the last name. Judge him by his unique character, track record, and positions.

I’ve always like the former Arkansas governor with his quick wit and southern charm. His closing statement, in which many folks thought he was talking about Donald Trump (there were a few boos), while referencing Hillary Clinton was a great example of his humor, genteel personality, and intellectual sharpness. He would make a good president–but may have to yield to younger versions of himself.

Huckabee’s the only promoter of a massive change to the tax code–The Fair Tax–while honoring our pledge to retirees: “If Congress wants to mess with the retirement program, why don’t we let them start by changing their retirement program and not have one, instead of talking about getting rid of Social Security and Medicare that was robbed $700 billion to pay for Obamacare.”

Mike Huckabee would make a wise and seasoned president.

Walker didn’t overwhelm in this debate, but he held his own with the opportunities he was given. He has changed his position on immigration, but that’s refreshing honesty and growth instead of flip-flopping. He was a fighter in Wisconsin that took on the unions and won elections in a blue state–three times.

On the bad Iran nuclear deal he said, “This is not just bad with Iran, this is bad with ISIS. It is tied together, and once and for all, we need a leader who’s gonna stand up and do something about it.”

Scott Walker is also young–and could be a great leader for this nation.

John Kasich and Chris Christie – B

I’ll lump these two together because they’re both strong leaders who did fine in the debate. Kasich’s record as governor of Ohio is superb and Christie is known as a no-nonsense leader–Trump-lite.

Christie is one of the few leaders willing to take on American entitlements: “If we don’t deal with [entitlement reform], it will bankrupt our country or lead to massive tax increases—neither one that we want in this country.”

I think Kasich, as governor of the must-Republican win state of Ohio, would be a sound president–especially if Marco Rubio were his VP and carry his home state of Florida.

I like Paul’s grit, but he was too strident in the debate and often didn’t look presidential–but petty and small. He’s weak on foreign policy but also believes in expanding the Republican base which is essential.

Let’s keep him in the Senate to battle for the truth there.

It was a brilliant idea by the Fox team to begin the debate asking if any candidate would consider a third party run if they lost the Republican nomination.

Only Donald Trump raised his hand.

That was a bad move and he has begun to lose market share (9% drop in Rasmussen polll). It’s not just that loyalty is an important character quality. It’s undebatable that any third party challenge in 2016 will give the election to the Democrats–either Hillary Clinton or someone else.

Anybody remember Ross Perot? I don’t believe our nation can survive a third term of what we’re currently experiencing. We need a U-turn–a reformation and revival.

I give Trump a C- because of his cruel and crude remarks to Megyn Kelley, his gruff demeanor, and having very little substance to his answers other than putting on the tough guy hat. He did say rightly on immigration: “We need to build a wall, and it has to be built quickly. And I don’t mind having a big, beautiful door in that wall so that people to come into this country legally.”

Trump still rides the anger and angst of the American voter who are tired of business as usual in D.C. by what Ted Cruz calls the “Washington Cartel.” Trump’s brashness is invigorating and his wealth and power attractive to a celebrity-based culture.

But he didn’t stand out in the Great Debate.

Going forward, we need to view the Great Republican Debate as the opening round of “March Madness” for the presidency. Over the next fifteen months the contenders will be whittled from seventeen to eight, to four, to two, to the nominee.

Don’t worry about the process and up and downs. This is the political playoffs–with all the best teams.

May God’s choice for renewing America emerge through our prayers and votes.

Posted in Leadership, Politics, Reformation
← Planned Parenthood and its Doctrine of DemonsWhy Trump is Resonating →