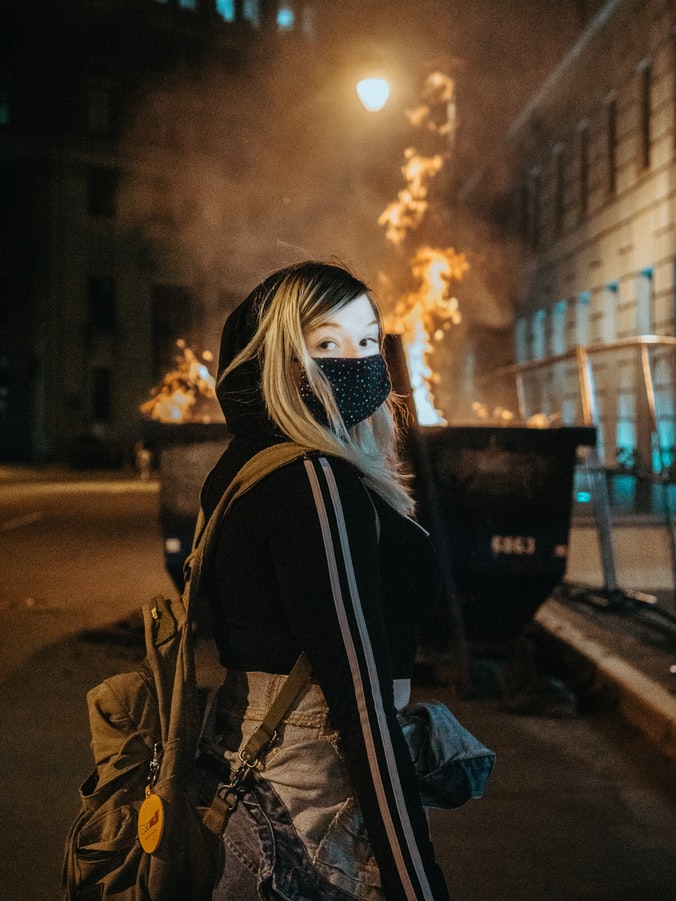 Seattle mayor Jenny Durkan’s vision of a “summer of love” has become the summer of hate.

I don’t think she gets it (or maybe she does).

Anarchists have burned and looted Portland for eight weeks. Seattle is still on fire. In other Democratic-run cities, chaos and destruction become normal and commonplace.

Because of double jeopardy and the sins of a falling nation.

Double Jeopardy and the Sins of a Falling Nation

We might describe the “Summer of ’20” as a double-double jeopardy.

The first has been the pandemic followed by rioting. On the virus front, I’m more convinced that the satanic realm released it worldwide to multiply fear, soften us up to increasing tyranny, and stifle the voice of the Church as we haggle about wearing masks and aren’t allowed to meet.

Like many Americans, I’ve become skeptical of the stats and scaremongering. Yes, the coronavirus is serious. But a plethora of science tells us we overreacted, should have isolated only the elderly (85% of deaths are among people over 65), practiced good hygiene and social distancing, and not closed the schools (22 European nations are now open with no virus-related consequences among kids and teachers).

I now believe the lock downs were unnecessary. They were intended to wreak havoc on the economy and take down an American president who stood in the way of progressive plans. We’ve been fooled to allow anarchy to explode during a time of weakness and anxiety.

Victor Davis Hanson, agrees that today’s riots are different than the ‘60’s. Those protests came from a rebellious younger generation. The older folks still held a Judeo-Christian worldview of respect for God, authority, and the rule of law. Those values held the American center together and protected us all.

For example, when thousands descended on Washington, D.C. in 1968, President Nixon acted in law & order fashion–arresting 8,000 demonstrators. The rioting died down because the older leaders kept the peace (which is the biblical role of government, i.e. Romans 13:1-4).

The radical generation of the 60’s now serve as “progressive leaders” in American society. They dominate academia, the media (except talk radio), higher education, and serve as the mayors, governors, and legislators in many blue cities and states. They also control the Democratic Party.

As today’s youth take to the streets to loot and burn Portland, Seattle and other cities in the country, the older radicals support them as “peaceful,” tell the police to stand down, and even march with them.

Radical Congressman Jerry Nadler said yesterday that the Portland riots were a “myth” while most of the  press refuse to show the videos of burning and destruction. The American people are being misled.

In the early 1980’s, I became concerned that America was in great peril if our nation turned from God. I  studied the book of Jeremiah because he lived when Israel experienced terminal justice for their sins.

I analyzed his message to a nation that was “reaping what they’d sowed” and shared it across America for decades. (You can watch it on video under the title of “Who Will Stand Up for Freedom?”).

Here are the highlights.

Freedom is a goal or an end in life (John 8:32). It is also a means to an end–to healthy relationships and fruitfulness. Freedom is also very costly to achieve and maintain because it requires character and commitment–what Thomas Jefferson called “eternal vigilance.”

“A general decay of principles and manners will more surely overthrow the liberties of America than the whole force of the common enemy. While the people are virtuous, they cannot be subdued, but once they lose their virtue, they will be ready to surrender their liberties to the first internal or external invader…If virtue and knowledge are highly valued among the people, they will never be enslaved. This will be their security.“

Currently, the “internal invaders” are loose and being cheered on in America.

History shows that godly nations have the tendency over time to allow sin to eat away at their foundations, and in doing so, take away their freedoms. This is God abandoning the people to judgment (justice).

These are the sins of a falling nation taken from Jeremiah’s messages to the southern Kingdom of Judah circa 626-580 B.C.–with application to America.

IDOLATRY – 67 verses. “In God We Trust” is being erased by selfishness.

Jeremiah 44:2-5 – “This is what the Lord Almighty says: You saw the great disaster I brought on Jerusalem and on all the towns of Judah. Today they lie deserted and in ruins because of the evil they have done. They provoked me to anger by burning incense to other gods…Again and again I sent my prophets who said, ‘Do not do this detestable thing I hate.’ But they did not listen or pay attention; They did not turn from their wickedness or stop burning incense to other gods.”

What is idolatry? Anything you love more than God. American forms include numerous aspects of self-pleasure created by affluence with the “Big Three” being sex, money, and entertainment. Others include science, technology, military strength and many other lust-loves (cars, homes, gadgets, philosophies, movie stars etc.).

DISTORTED RELIGION – 49 verses. The Church is asleep, divided and worldly.

Jeremiah 23:16,17, 36 – “Do not listen to what the prophets are prophesying to you; They fill you with false hopes. They speak visions from their own minds. not from the mouth of the Lord. They keep saying to those who despise me, ‘the Lord says you will have peace.’ And to all who follow the stubbornness of their own hearts, they say, ‘No harm will come to you’…Every person’s word becomes his oracle, and so you distort the words of the living God.

DULL CONSCIENCES – 24 verses. We no longer understand “right from wrong.”

HUMAN INJUSTICE – 13 verses. We’ve become cruel and uncaring toward others.

Jeremiah 22:16-17 – “He defended the cause of the poor and needy, and so all went well. Is that not what it means to know me, says the Lord. But your eyes and heart are set only on dishonest gain, on shedding innocent blood and on oppression and extortion.”

Anarchy, crime and looting, neglect of the poor, corporate greed, and the greatest holocaust of history– abortion. I thought injustice would be number one–but it’s really the result of the first three.

Israel was reaping was she sowed in the 6th century B.C. America is doing the same in the 21st century A.D.

“When the foundations are destroyed what can the righteous do?” (Psalm 11:3).

NEXT WEEK: My thoughts on America’s Fourth Great Awakening–and hope.

Posted in Abortion, Freedom, General, God, Israel, Judgment, Justice, Religion and tagged Disorted Religion, Double Jeopardy, Dull Consciences, Human Injustice, Idolatry, Sin of a Falling Nation, Who Will Stand Up for Freedom
← This Culture War is All About GodHope for Great Revival and Glorious Return →