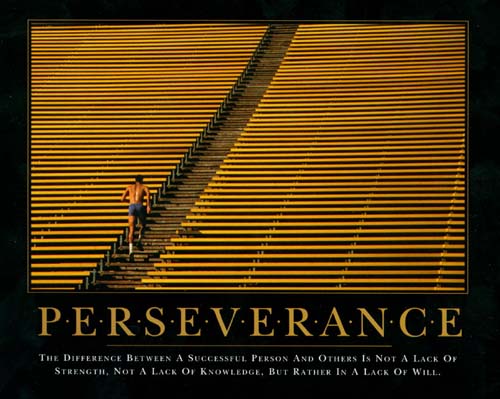 During the 1980’s, I met a Christian leader who was a spokesman for moral renewal. Jerry Falwell, pastor of Thomas Road Baptist Church in Lynchburg, Virginia, catapulted into national prominence through starting the Moral Majority.

For years, he was probably the most loved and hated man in America.

One evening he spoke at a rally in Washington, D.C.  I don’t remember the details of his speech, but I’ll always remember one line. He said, “The true greatness of an individual is always proportionate to his willingness to endure testing.”

This past week we celebrated the greatest act of perseverance in history–Jesus’ death on the cross. He did so to fill the world with joy–that our sins are forgiven, and that we too can experience eternal life through trusting him.

We must learn to persevere like Jesus to inherit that promise.

The Invincible Power of Perseverance

For years I had a hard time understanding the difference between self-control and perseverance. Didn’t both involve the will? Aren’t each simply a disciplined choice?

Both involve a choice, but they have different meanings. Self-control has to do with restraint over one’s own impulses. Perseverance involves remaining steadfast despite opposition. It accepts being willing or able to bear difficulties and problems in life.

Perseverance is continuous self control when times are tough. It’s learned through determination and discipline–attributes forged during the hard, battle-weary moments of our lives when we encounter life’s battles. These tests can be physical or mental and include the whole gamut of human experience

When painful circumstances come upon us, we are faced with a choice to hold on and endure or give in to our feelings and emotions.

I believe that God starts his “endurance training” in our lives in physical areas. Once we learn to persevere in bodily disciplines, we can apply the same lessons to the spiritual and mental realm.

Most people need to work to survive. The need to work forces us to set alarm clocks, pull ourselves out of bed when we’re still tired, battle traffic or nature, and deal with diverse personalities and circumstances.

By eating the forbidden fruit, Adam and Eve passed on to all their descendants both the curse and the blessing of work. In Genesis 3:17-19, God said:

By learning to work hard, man develops patience and endurance. This quality of perseverance is both a restraint on and a builder of character.

My dad grew up during the Depression of the 1930s. His father worked two eight-hour shifts in the rubber factories of Ohio to put food on the table. for a family of eight. From his earliest memories, my dad wanted to become a doctor.

His only answer was to embrace a discipline of hard work. For six years he worked in a rubber factory all night, went to college during the morning, studied all afternoon, slept for two hours, then went back to work again.

I learned to persevere in my life through his powerful example.

Another physical area of our lives where perseverance can be learned is eating, or more accurately, in not eating–fasting.

Jesus began his own earthly ministry with a forty-day fast that rooted His character in perseverance. The Father knew that three years later He would desperately need this trait to face the agonizing moments of betrayal, flogging, crucifixion, and death.

He passed the fasting test. Immediately afterwards He went back to Galilee to preach the gospel, heal the sick, and proclaim the kingdom of God (Matthew 4:23). In His first big sermon, called the Sermon on the Mount, He encouraged His disciples to fast also. “Your Father,” He said, “will reward you” (Matthew 6:16-18).

Our body naturally craves food. It doesn’t always need it. When we give up eating to spend special time with God, we learn to endure the pain of a gnawing stomach for a greater reward.

I would urge you to let fasting become a part of your character development. It’s a quality you need to develop for greater challenges that may lie ahead.

Another place where endurance can be learned is in physical exercise. It’s often a contest of mind over matter. In this case, the “matter” is our finite, human bodies.

You know that in a race all the runners run, but only one gets the prize. So run to win! All those who compete in the games use self-control so they can win a crown. That crown is an earthly thing that lasts only a short time, but our crown will never be destroyed. So, I do not run without a goal. I fight like a boxer who is hitting something–not just the air. I treat my body hard and make it my slave so that I will not be disqualified after I have preached to others.

Paul specifically uses the example of sports training to highlight the importance of perseverance. In sports we learn to discipline our bodies, to run to win. If athletes discipline themselves for earthly medals, then we should certainly do the same for eternal rewards.

One day while jogging in southern Maine, I felt that God wanted to speak to me about the importance of learning perseverance through physical conditioning. The pain of my out-of-shape body brought back vivid memories of past sports contests.

No matter how much it hurt, I was determined to keep going. My body kept screaming no. My persevering spirit proclaimed yes! As I rounded the last corner and stumbled over an imaginary finish line, I thought I heard the Lord saying:

“Very good. Now do the same in prayer.”

The words cut deep. I’d learned to run hard. But that was just a training ground for the greater issues and duties of life and ministry. What God really wanted to teach me was to persevere in the more important areas of life.

After we have learned endurance through the disciplines of hard work, fasting, and bodily exercise, we can apply this quality to every area of our life. In James 1:2-4, God gives us a phenomenal promise related to perseverance.

When you have many kinds of troubles, you should be full of joy, because you know that these troubles test your faith, and this will give you perseverance. Let your perseverance show itself perfectly in what you do. Then you will be perfect and complete, lacking nothing.

God promises we will have problems. He tells us, though, to rejoice over them because this testing of our faith will produce perseverance. And what will perseverance make us?

“Perfect and complete, lacking nothing.”

That means invincible to the attack of the enemy and thoroughly able to do God’s will.

This quality is being tested in Ukraine right now. We will face a similar test in coming years.

We must learn to persevere so we can triumph over difficulties and do God’s will in our day.