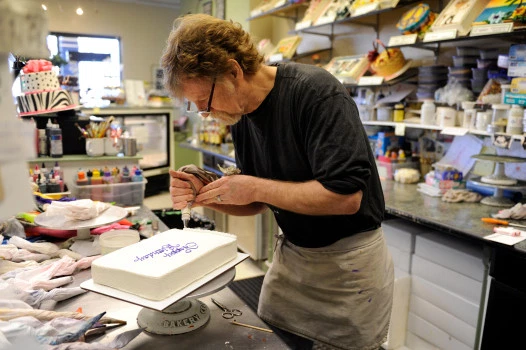 One of the most important Supreme Court cases in memory was argued today in Washington, D.C. It pit the rising tide of secular intolerance against the time-honored traditions of free, biblical-based cultures.

Many believe that Masterpiece Cakeshop v. Colorado Civil Rights Commission is a watershed religious freedom case. Mathew Staver, Founder of Liberty Counsel, warns that if the Court rules against Christian baker Jack Phillips, we can expect religious persecution to dramatically increase in the United States of America.

I hope you prayed today.

I ask you to continue to intercede that the Supremes will get this one right for the future of our nation and the cherished right of religious liberty.

The USA is definitely between a cake and a very hard place.

I am indebted to Intercessor’s for America for calling the people of God to pray for today’s Supreme Court arguments. In their excellent blog, they highlighted today’s hearing and shared both a video and an article worth passing on.

Watch the video first about Jack Phillips and his Masterpiece Cakeshop in Lakewood, Colorado if you’re not acquainted with this issue. It runs under four minutes and will give you Jack’s heart, faith, business background and the story of his sacrifice and courage which brought us to this moment. The video was produced by Family Research Council.

You can watch the video here.

Dr. Michael Brown has written the best article I’ve seen on this subject–published recently on Townhall.com. He’s the host of the nationally syndicated Line of Fire radio program. His latest book is entitled Saving a Sick America: A Prescription for Moral and Cultural Transformation.

I share Dr. Brown’s heart for an American renewal and couldn’t have captured the essence of this Supreme Court case any better. Here is the article in its entirety, then some concluding remarks.

Why The Masterpiece Case Matters

“The answer to all these questions is: Of course not. Why, then, should a Christian baker be required by law to design a cake celebrating the ‘wedding’ of two women (or men)?”

“That is the big question the Supreme Court will be answering when it hears the Masterpiece Cakes case involving Christian baker Jack Phillips.”

“The Alliance Defending Freedom, which is defending Phillips, has pointed out: 1) ‘Jack does not discriminate,’ and he was perfectly happy to sell the gay couple, who subsequently took him to court, cookies and brownies and anything else pre-made off of his shelves; 2) ‘Jack has turned down other cakes in the past,’ including Halloween cakes and lewd cakes; 3) ‘Jack has faced anti-religious bigotry as well as threats and intimidation simply because he declined to promote an event,’ so he is the one being singled out for unfair treatment; 4) ‘Jack owns a private family business, and he doesn’t give up his rights when he sells his art,’ and by calling his business ‘Masterpiece Cakes,’ he is making clear that for him, they are works of art; 5) accordingly, ‘Jack’s shop has been called an ‘art gallery of cakes’; and 6) ‘Wedding cakes made up about 40 percent of Jack’s business,’ and these are all custom designed. But due to Colorado’s laws and legal rulings to date, he has had to drop this part of his business entirely.”

“Now, common sense would say that this case should be a no-brainer, a slam-dunk win for Jack Phillips and his attorneys. And in principle, I agree. The problem, however, is that ‘gay rights’ have been exalted to such a degree that these ‘rights’ trump all other rights and freedoms, including our freedoms of conscience, speech, and religion.”

“Put another way, you can freely exercise your Christian beliefs unless those beliefs offend gays. In that case, you’re breaking the law.”

“And what if a Hindu came in and wanted a, ‘Krishna is Lord’ cake? Phillips could politely decline, without legal penalty or pressure. The same with a Muslim baker declining to bake a cake for a Christian with the words, ‘Jesus is Lord.'”

“But wouldn’t that offend the Hindu and the Christian wanting to buy the cakes? Perhaps so, but the bakers are rightly protected by the law and cannot be penalized for refusing the business.”

“Why, then, are gays and lesbians treated differently? Why are they put in a special category?”

“The more realistic answer is that some gay activists have always had as their ultimate goal the silencing of those who resist their cause.”

“As a Christian attorney once commented to me, ‘Those who were once put in jail want to put us in jail.’”

“In the days ahead, many on the left will argue that Phillips was guilty of discriminating against gay customers. But that is a complete misrepresentation of the facts, and if the Supreme Court finds him guilty, the implications for America will be massive.”

“It will mean that the highest court in the land has ruled that, in virtually all conceivable cases, gay rights trump religious rights. And it will mean that Christians in particular can be forced to violate their consciences and their deeply held, historic beliefs under penalty of law, with the real potential of losing their very livelihoods. And should they still refuse to comply, it could mean a jail sentence too.”

“While some on the left (including LGBT activists) will say, ‘This is not what we intended,’ plenty of others will gloat. After all, if we deserved to be thrown to the lions in one generation, it’s no big deal to imprison us in another generation.”

“I’m hoping that the Supreme Court does the right thing. If not, my leftist readers may mock my words today but you will mark them tomorrow.”

Well said and very true. Here are some points to ponder as we pray for an Spirit-led revival of freedom in our land:

This important case for religious liberty shows how vital it was that a pro-Constitution president was elected who then elevated Neil Gorsuch to the Supreme Court. The nation needs more good justices to guarantee that freedom of conscience is cherished.

A wise decision in Masterpiece Cakeshop v. Colorado Civil Rights Commission could be a turning of the tide in religious freedom and tolerance.

Otherwise we might be stuck between a cake (and many other things) and a hard place.