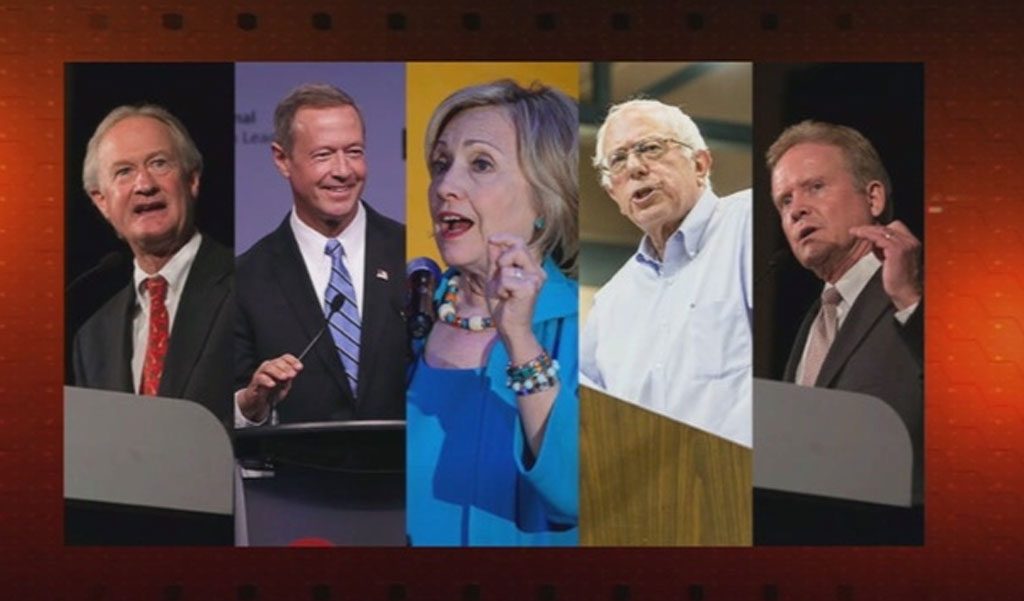 If you watched the first Democratic debate, you now know that the preferred label for Democratic candidates is no longer liberal, but progressive.

They all used the term to describe themselves and seemed to revel in it.

To be progressive sounds like you’re all about progress. What do you want to progress toward? Since progress entails moving away from the past, which aspects of the past are you jettisoning?

I found a passage in the Bible that indicates that being progressive is actually regressive.

First of all, let’s give a little history on being “progressive.” According to historian William Leuchtenburg:

“The Progressives believed in the Hamiltonian concept of positive government, of a national government directing the destinies of the nation at home and abroad. They had little but contempt for the strict construction of the Constitution by conservative judges, who would restrict the power of the national government to act against social evils and to extend the blessings of democracy to less favored lands. The real enemy was state rights and limited government.”

I think you get the drift.

Progressives believe government, especially Big Government, is a positive source for good, the US Constitution is antiquated, and the Feds should control the states.

Big Government is God (the greatest force for good) in the progressive world.

Most historians say that modern progressivism gained favor as an ideology between the 1890s and 1920s as both Democrats and Republicans, especially Woodrow Wilson and Teddy Roosevelt, pursued political, and economic reforms, as well as visions of world peace.

Chief among these aims was the pursuit of trustbusting (breaking up very large monopolies), support for labor unions, public health programs, environmental conservation, and promotion of world government (beginning with the League of Nations and eventually the United Nations).

“Many on the left today call themselves ‘progressive,’ and they do so not just because it’s a nicer way of saying ‘liberal,’ but also because they very much intend to revive the political principles of America’s original Progressives, from the Progressive Era of the 1880s through World War I.  Why would leftist politicians, like Mrs. Clinton, purposely identify themselves with this Progressive movement?”

“The reason is that America’s original Progressives were also its original, big-government liberals.  Most people point to the New Deal era as the source of big government and the welfare state that we have today. While this is perfectly accurate, it is important to understand that the principles of the New Deal did not originate in the New Deal; rather, they came from the Progressives, who had dominated American politics and intellectual cultural a generation prior to the New Deal.”

“We have no less an authority on this connection than Franklin Roosevelt himself.  When FDR campaigned in 1932, he pointed to the Progressives – and in particular to Theodore Roosevelt and Woodrow Wilson – as the source of his ideas about government…The movement was also comprised of intellectuals and writers who are less well known but who have been very influential in America.”

“These Progressives wanted a thorough transformation in America’s principles of government, from a government permanently dedicated to securing individual liberty to one whose ends and scope would change to take on any and all social and economic ills (italics mine)”

But we need to go further back in history to give progressivism its proper place. For the past three hundred years. two philosophies of man, government, and salvation have been at war in the Western world. Let’s call one the biblical view of life and the other, the secular view of reality.

The biblical view teaches there is a Creator God whose kingdom rules the universe. God placed man on earth to steward and develop it, but mankind fell through sin from God’s original purposes. God brought salvation through Jesus Christ which human beings can accept by faith. Born again believers are empowered by the Holy Spirit to transform the nations of the earth through godly character, biblical principles in society, just laws, compassion and generosity, and limited government.

The early American rallying cry was “We have no King but Jesus.”

Biblical principles of morality, family, government, economics, justice, compassion, and peace through strength is what created the blessings of the West world over the past centuries.

The Revolutionary War was fought to establish the biblical worldview in the New World. Exhibit A is American exceptionalism–a godly, free, and prosperous nation greater than any in history.

The secular view of life teaches that there is no God, no moral absolutes, and that human beings are on Planet Earth by accident due to billions of years of evolution. Without God and any of his principles to guide us, secularists believe that strong-men and governments must arise to “save” the human race and create peace on a global scale.

The rallying cry of secular-progressives is that “We must save ourselves! (Humanist Manifesto).”

The French Revolution is an example a secular-progressive triumph. Violent men overthrew the governing powers, killed the followers of God, and filled the nation with rivers of blood. They established a secular dictatorship to guide the ignorant masses into future “progress.” God was out; Morals and family were passe, and a new man-made Utopia was envisoned.

Fortunately, that “progressive” revolution died and the American one succeeded.

Since that time, other forms of man-made progressive salvation have been tried in other parts of the world under the names of socialism, fascism and communism–to name a few. They all have the same basic worldview, but only differ on the power means to get there.

Those secular “isms” of the 20th century killed hundreds of millions of people. How’s that for progress? By any fair standard that’s tyrannical and regressive.

So, since progressivism entails moving away from the past, which aspects of the past do current day progressives want us to get rid of?

Progressives want America to regress from:

Why are all these things regressive (going backwards)?  Because most of them were in primitive form in the New World prior to the birth of America.

For thousands of years the understanding of God was limited and distant on American soil. Many native tribes lived in constant war with their neighbors and even sacrificed their children to the gods of the land. True freedom and human rights were unknown. Biblical knowledge had never been applied to lift people out of poverty and conflict and into the blessings of freedom and civility.

Chief-centered tribalism ruled the land creating misery, backwardness and lack of hope. Don’t believe the romantic allusions of the “Noble Savage” and peaceful features of pre-American life. They are myth, not reality. This was a tribal form of man-centered governance to which modern progressives want us to return in a modern-day technological form.

Remember this:  Secular, wordly, liberal, and progressive are all the same thing. They are simply different words that describe a rejection of God and his wise rules of living while pointing to man-made solutions that have always failed and created tyrannies.

Here’s the Bible verse that spells it all out:

“Obey my voice and I will be your God and you will be my people; and you will walk in all the way which I command you, that it may be well with you. Yet, you did not obey or incline your ear, but walked in your own counsels and the stubbornness of your evil hearts. You went backward and not forward.”

Backward not forward. That’s where the progressives are really taking us. Being progressive is actually regressive–just as trusting men is inferior to trusting God.

True progress comes through following the ways of our Great Creator and Savior God in every aspect of our personal and corporate lives–not regressing to the cruel whims of fallen men.