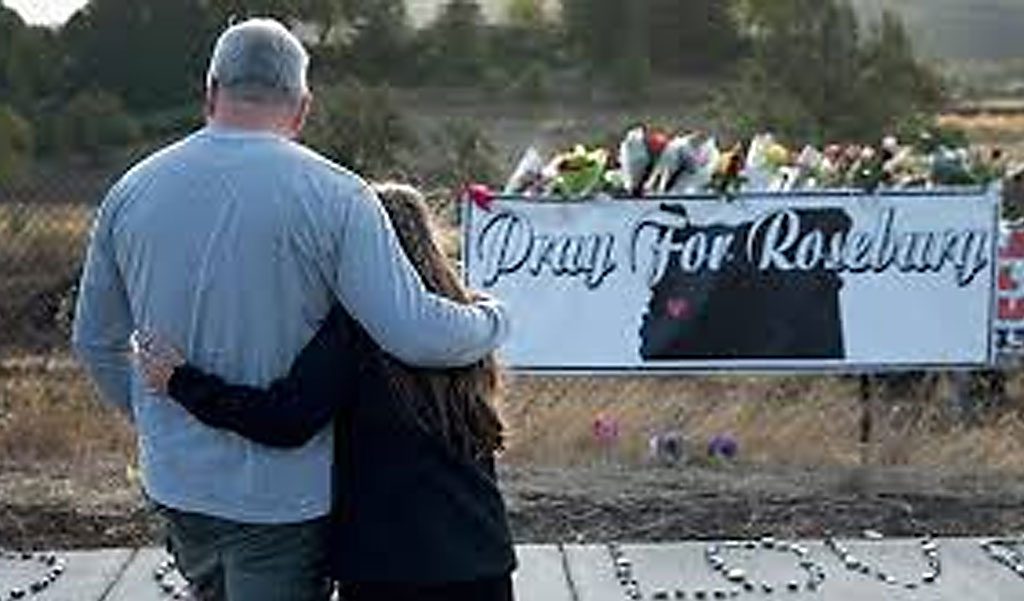 The recent college shooting in Roseburg, Oregon has renewed the issue of gun control in the United States.

Immediately following the death of nine students at the hand of a madman at Umpqua Community College, President Obama said that the incident should be politicized and passionately argued that we need stricter gun laws.The people of Roseburg disagreed–many of them protesting the president’s visit last Friday to comfort the families of the victims.

Oregon is a western state that strongly believes in the right to bear arms. On the other hand, mass murder shootings are horrific and ugly. So how do we stop them?

I believe it’s a matter of omnipresence.

Let’s start with some historical perspective. It’s always good to get our “bearings” before proceeding ahead. I  begin with a discussion of items I think we should all agree upon. Then I’ll propose what are the biggest factors in the prevalence of mass murder shootings.

It involves omnipresence–the lack of it on one hand and the presence of it on the other.

Where We Should All Agree

1.  The problems we have with mass murder today is much smaller than in the past.

Prior to the Magna Carta and the rise of Western/Christian civilization, human life was trivialized and people lived in daily fear of being killed.

You could die en masse any day.

Think about that. For most of history, prior to the Good News Of Jesus Christ giving birth to human dignity and universal human rights, most people lived in daily dread. At any moment, a neighboring tribe, chieftain or army could enter your city or village, rape all the women, kill the men and children, and plunder everything in sight.

Read ancient history. Explore the medieval period. Ponder about the conquests of Attilla the Hun, the Goths and Visigoths, and raiding hordes of Ghengis Khan.

For thousands of years, in almost every part of the world, mass murder took place nearly every day in a city near you.

In fact, it’s still talking place in some parts of the world–the ones without the light of biblical truth.

As recently as fifty years ago, warring and cannibalistic tribes existed in Papua New Guinea and other parts of Africa and Asia. Don Richardson describes in his famous book Peace Child how he and his wife worked among the Sawi tribe of Irian Jaya.

That was 1962. At the time, the Sawis and many other tribes warred constantly and even ate their victims. Mass murder was a way of life until the Good News of Jesus’ death and resurrection changed their angry hearts and showed them a better way to live–in faith, love, peace and security with their neighbors.

In 2015, in some parts of the Middle East and North Africa due to the rise of ISIS, civil war, Sunnis against Shias, and the Muslim concept of jihad, many people face the reality of mass murder daily.

That’s why they’re streaming by the thousands into Europe and other nations seeking safety. In the world of jihad, their village, town or city could be the victims of homocide on any given day.

For those of us who still live under the umbrella of a Christian-heritage civilization, give thanks to God that you are not as vulnerable as others. Mass murders on your shores are few and far between. You wouldn’t even think of your town being overrun this morning by an invading army and everyone being dead in 24-48 hours.

Most of us get up each day, go to work and school, come home to our families and enjoy the relative peace of a society that fights tyranny, lawlessness, believes in human rights, and, in a fallen world, does a pretty good job of protecting the peace.

2.  There will always be crazy people and murders in our fallen world.

No amount of legislation or improvement in mental health will stop some fallen human beings from taking the lives of others. Murder began with Cain killing Abel and continues to this day. Only in Christ’s eternal kingdom will there be no murders–no crying, no sorrow and no pain.

3.  America will always be a nation of gun rights and gun access due to its history and size.

American history began with local citizens (militias) defending their freedom with guns against their own government (the British Crown) which had become tyrannical in its demands regarding taxation and other issues. Americans recognized the God-given right to defend themselves against such oppression and fought the Revolutionary War to guarantee their freedoms.

We then tamed a large and rugged wilderness filled with warring native peoples (for the most part) and many wild animals. Guns were a necessity for survival and became an integral part of American life and survival in the “civilized” east and wild west.

America is still a large nation with millions of miles preserved for hunting and other gun-oriented sports. Our three hundred and twenty million people possess nearly three hundred million guns under the liberty of the Second Amendment which gives us the right to bear arms.

Ninety-nine point nine percent (99.9%) of those people use their guns lawfully. Gun ownership is as America as apple pie.

4.  The murder rate in America has declined sharply since colonial days. It spiked in the 1970s but has been dropping steeply since the early 1990s.

Read any book on homocides or Google any reference to violent crime or gun deaths in the USA and it will substantiate the above claim. Murder rates have been going down for twenty years–not up. The only increases today, such as in Baltimore, New York and Chicago, are due to politically motivated anti-police movements in Democratic-run cities–such as the president’s hometown.

This is a similar pattern to the anti-police movements of the sixties and seventies which spiked the rate then. In other words, progressive agitators are behind the only increase in gun violence both yesterday and today.

Overall, homocides are down due to better police enforcement, stiffer sentences, an aging population, and other societal factors.

5.  There is no such thing as universal background checks. That will only exist in heaven.

Gun control advocates are famous for arguing that we should have universal background checks on all guns sales, bullets etc. It’s a noble but ridiculous idea. Yes, all reasonable people can agree that there should be bans on certain types of military-style weapons, background checks on most gun sales, appropriate licensing and training etc.

But it will never be universal or total. That can only take place through confiscation, not regulation–which is probably the true, unstated goal of secular progressives.

Ain’t gonna happen in America. Guns are too big a part of our heritage and Second Amendment rights.

Besides, even confiscation can never get rid us of all guns in a nation. Over thirty years ago I saw a bumper sticker in Oklahoma which settled my views on gun control:

“When guns are outlawed only outlaws will have guns.”

Think about that for a moment and let the penny drop. Crazy people or governments will always find a way to kill in this sin-sick world. We don’t want them to possess the only guns. Self defense is both a tremendous right and an effective deterrent.

Yet, ever since Columbine, it seems like mass murder shootings are up, or are more “popular” in America today. That’s not really true, but it seems so.

The Matter of Omnipresence

Here’s where the subject of omnipresence (being “present everywhere”) gives the best answer to our dilemma. In one case, omnipresence has shrunk. In the other, it has grown.

“Without the redemptive revelations of God the people are unrestrained.”

In other words, when a nation loses its fear, reverence, respect for God (prophetic vision or redemptive revelation), then people become uncontrolled in their character and behavior.

Believing in God–in the certainty of eternal blessing or punishment–that God is looking upon all our actions–that He loves us and wants to give us an abundant life– this fear of the Lord is the greatest restraint in any nation on criminal behavior.

The more the people of a nation are encouraged to love and fear God, the less they will be inclined to commit sin in any form–especially taking the lives of others made in His image. The sense of God’s omnipresence (that He’s watching, caring, and present in our lives) becomes a huge restraint on human actions and attitudes.

A healthy fear of God has prevented many a sin.

But when we remove God from society, kick Him out of the schools, remove his commandments from our courthouses, and raise our fists toward heaven, the natural consequence of that rejection of his omnipresence is an uptick of unrestrained evil.

A God-free zone becomes an inevitable killing field. Make it a gun-free zone as well and there is little to stop the carnage.

Conversely, a different type of omnipresence is probably multiplying mass shootings. It’s the omnipresent 24/7 continuous news coverage that gives would-murderers their fifteen minutes of fame and then spreads the idea of mass killings to copycats all over the nation (reinforced by violent video games, movies etc.).

One hundred years ago, when a single murder or mass murder took place, most people never learned about it. It didn’t touch them, burden them, or inspire them. There were few ways to spread violent news to masses of people outside of newspapers and later the history books.

That was good. You can’t copycat evil you aren’t aware of.

Then television came along increasing the desire for “fame” and giving people ideas (both good and bad) that they never thought about before. In some ways the omnipresence of the media (now on TV, smart phones, I-pods, game consoles and tablets) has replaced the omnipresence of God in the human mind and heart.

That’s why it feels like things are getting worse.

I agree that the media needs to share the news. But not in endless blood-and-guts cycles that instantly make famous some wicked human beings.

Here’s the bottom line: The modern media needs to curtail glorifying evil, we need to tone down the ever-present machines in our lives, and we, as a people, need to repent and return to the fear of the Lord.

That’s the only way in America that mass murders shootings will decrease.

Posted in Politics, Worldview
← The Fundamental Transformation is CompleteBeing Progressive is Actually Regressive →