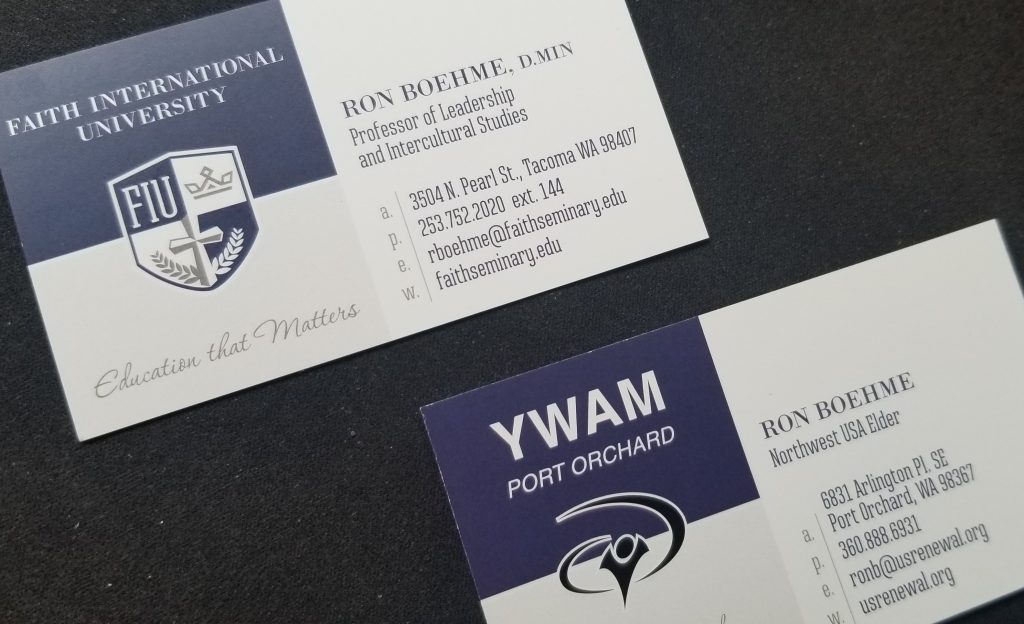 I have carried a business card with me for at least forty years. Various cultures use cards to share personal contact information, solicit clients/advertise their business, or give people an aura of “what they do.”

But business cards can also be used subtly to establish personal identity–in a way that can be hurtful to our character and walk with God. It can become a snare of the “heart.”

What’s on your business card?

What’s On Your Business Card?

My current card allows me to share my Youth With A Mission identity on one side and Faith International University specs on the other–complete with different logos, information, and even slogans (YWAM–“To Know God and Make Him Known,” and FIU “Education That Matters.”)

In fact, when I think of these two roles, I conjure up different images of me. In YWAM, I’m a dressed down, informal, Northwest elder in a global youth movement. At Faith I wear a business shirt and pants, sometimes a tie, and am known as a professor of leadership and intercultural studies.

Each identity can bring an “image” to project, enjoy, or even love.

Truth be told, we all have multiple roles or identities in life–so we have many different “business cards.” I also am a father, husband, son, speaker, author, church elder, missions leader–and gardener and chicken farmer (on a small scale). We can use all these roles or none of them to establish an identity in life.

But all change over time and cannot be the basis of our identity. I learned that lesson four decades ago in the capital city of business cards–Washington, D.C.

I was in awe of the grandeur of our capital when I first visited it in 1976 to write a book on the presidential election. The towering monuments, marbled halls, and people in crisp business suits spoke of power, prestige, and knowing who they were.

When we moved to D.C. to serve the Washington for Jesus Rally in 1980, then planted ourselves in the capital region through 1986 while establishing various ministries, I became thoroughly aware of the pride-and-accomplishment-complex of the city–even in dress.

One night I was leading a Concert of Prayer at a church on Capitol Hill. I had invited a savvy businessman to the meeting and thought he was enjoying it. Near the end he slipped me a business card that I assumed contained a “Thanks for the Nice Night” note on the back. Instead, it read, “You look terrible. You’re wearing all the wrong colors. Only grays, blacks, and blues are fitting on the Hill–with khaki pants if you desire.”

The next week he took me shopping and bought me a “power” wardrobe. It went along with the new business cards I had printed as “Director of YWAM Washington, D.C.” That was my new identity–and I was proud of it.

Everybody in the city seemed to do the same. Business cards were embossed with gold and silver lettering, and eventually photos became chic. I started handing out my business card at important meetings and received them in return. Yes, capital city life was about who you knew, how you dressed, and, really, who you were.

It was your identity–in a definite pecking order.

One group of believers who broke this uniformity didn’t even have a  name, but simply called themselves the “Fellowship.”

One day I was unknowingly giving one of them a tour of our new 133 C. Street facility on the Capitol Grounds. At the end, I asked him what he did and who he worked for–expecting to receive his business card. Rather than reaching into his pocket, he humbly announced that he was one of a “group of brothers” that “shared Jesus” with people in the city.

“Oh,” I blurted, “You work with the Fellowship.”

He turned slightly red and admitted it was true. In our identity-crazed business card world, his lack of calling card gave away his differing perspective on power and identity.

I learned a lesson about business card identity in 1986 when, after various challenges and trials over the 133 C. Street Center, I resigned my position as YWAM director of Washington, D.C. and became  “card-less” for awhile. That even included a moment on a Hawaiian beach where I wanted to die.

Why? Because I had wrapped up my identity in what I did or accomplished. At least in my eyes, I failed.

But not in God’s.

Now as I read my journal of those “death of a vision” years, it’s joyfully clear God used those events to humble my pride, teach me who I really was in Him, and change my character so I would never strive again to find my worth in a role or position.

God also redeemed the mistakes. YWAM ended up selling 133 C. Street to the “Fellowship” that has used it as a vital Christian ministry center in the nation’s capital for over three decades. I have visited many times over the years and thanked God for his grace.

Doug Burleigh is the current leader of the group and a fifty-year friend. He was the president of Young Life for years, and now, after the death of his father-in-law, carries on the work of the “brothers (and sisters).” In September, he will be the guest speaker at our South Kitsap Golden High School Reunion in Port Orchard, Washington.

We won’t be handing out his business card to our classmates–just his first book, Jesus Changes Everything.

That’s true–and it starts with us finding our identity in Him alone–not what we do, say, accomplish, build, invent, or anything else in life. All those things have their place in our obedience to God, but they should never give us meaning.

There is nothing wrong with business cards when you have the right attitude toward them. They don’t define you. They just give out information that can be helpful to others.

And they change–from season-to-season with life’s circumstances. It’s foolish to find your identity in those shifting sands.

When we repent of our sins and put our trust in Christ, God prints a “business card” in heaven (actually an entry in the “Book of Life”) that says one thing.

That’s who we are. Nothing more or less.

But when the right time came, God sent his Son, born of a woman, subject to the law. God sent him to buy freedom for us who were slaves to the law, so that he could adopt us as his very own children. And because we are his children, God has sent the Spirit of his Son into our hearts, prompting us to call out, “Abba, Father.” Now you are no longer a slave but God’s own child. And since you are his child, everything He has belongs to you.

Your business may be serving God in the different roles He’s given you for your life on earth. But your real identity doesn’t come close to fitting on a cheap and transient piece of paper.

You are a child of God. Everything he has belongs to you.

Meditate on that amazing truth. Find your secure identity in your Loving Papa who adopted you into his eternal family.

Then glory in your real identity (business card): “Your Name Here: CHILD OF GOD.”

If you are not yet His follower, be reconciled to your Heavenly Father and receive your real ID today.