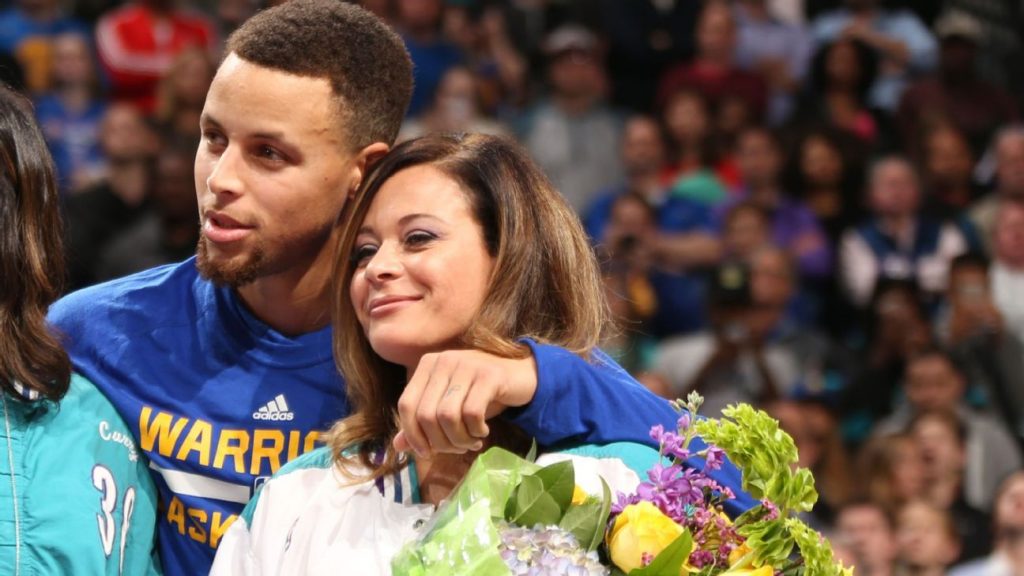 The Golden State Warriors are currently playing the Boston Celtics in the NBA Finals. As I write, the series is tied 1-1 with a Celtic victory in Game 1 and a Warrior triumph in Game 2.

Steph Curry had a game-high 29 points in their second match.

As Family Research Council points out, his life could easily have been snuffed out via abortion by his pregnant mother thirty-five years ago.

Be inspired by the story of warrior women for life.

I look at my wife as a “warrior woman.” She bore our six children with grace and marched with four of them when they were young (or in the womb) in the annual March of Life in Washington, D.C. during the 1980s.

She’s passionate about the abortion issue today. We both have close friends who killed their babies in the womb–and those women regret it deeply.

The world also misses their loss. We will not know this side of eternity how those children could have blessed the world for good or made major contributions to God’s Kingdom cause.

Because they killed them–in the name of personal choice.

Sometime this month, the U.S. Supreme Court will hopefully strike down one of the worst and most consequential decisions ever made by a human court. On January 22, 1973, Roe v. Wade made it legal nation-wide to kill your own child in the womb for almost any reason. Overturning that horrible decision will switch the abortion battlefield to the states.

Abortion worldwide is hands down the largest human genocide of all time–numbering between one to two billion human beings (it’s a hard number to peg). Current statistics show we kill 125,000 small, innocent humans every day–which is forty-to-fifty million a year.

Since another 160,000 older people die each day from all other causes, abortions make up fully 44% of all daily deaths around the world.

That a lot of human beings for the heavenly realm to process every twenty-four hours.

The main ethnic group being snuffed out in America via abortion is the African American community (38% of all U.S. abortions). They are also the highest percentage of those being gunned down in our progressive inner cities.

We must pray to end the holocaust. Today, I want you to be inspired by some “Warrior Women” who courageously make a choice for life.

(This article was first published by Family Research Council.)

When Golden State Warriors star Steph Curry was 13, he remembers his mom sitting him down after his team got crushed in a tournament that scouts were watching. She looked in his face, a moment he still remembers to this day, and said, “No one gets to write your story but you… Take your time… and write what you want to write. But just know that this story — it’s yours.” Twenty-one years later, the world is finding out that the two-time MVP almost didn’t have a story at all.

Sonya Curry had already had one abortion. “[I was] dating, you know, the older guy when I was in high school leading into college and making the decision about terminating a pregnancy,” she said in an interview about her new book, Fierce Love: A Memoir of Family, Faith, and Purpose.

Thinking back to that time was hard, she explains. “Telling those stories and just reliving those feelings that I kind of suppressed and pushed down for a long time… you wonder, did it mess them up at some point?”

When she realized she was pregnant again, Sonya had convinced herself the only option was abortion. She remembers standing outside of a Planned Parenthood clinic, wondering if she could ever go through with it again.

She says she felt “the Spirit interceding at that moment, in a way that I didn’t even know at the moment was happening…” Hearing Him speak, she realized, “I don’t want to make that decision again. And now I just gotta trust God to move forward with me having this child.”

That’s how close the three-time NBA champion came to not existing. “There could be no Stephen. If I would have gone through that, there would have been no Wardell Stephen Curry II.” Sonya pauses in the interview with pastor Luke Norsworthy to marvel, “God had a plan for that child.”

It’s a story that Baltimore Ravens running back J.K. Dobbins can identify with. “I have a positive outlook on life, because I’m still living,” the former Ohio State star has told reporters. No one knew how close the NFL pro came to not living until a couple of years ago, when Fox sportscaster Gus Johnson explained that the world wouldn’t be watching this incredible talent if his mom, Mya, hadn’t chosen life.

Late in the fourth quarter of one of his last college games, after more than eight million viewers had watched Dobbins spring into the end zone, another commentator shook his head in amazement. “What does this kid not do?”

While J.K. was on the sidelines being congratulated, Johnson started sharing the powerful story of a teenage mom, who was one clinic visit away from making Dobbins a name this country had never heard of. “[J.K.’s] mom, Mya, became pregnant when she was 18 years old,” he started. “She went to the doctor because she was thinking about aborting the baby — but changed her mind.

That baby turned out to be that young man, J.K. Dobbins,” he added, “who she calls her ‘miracle baby.'”

The idea that the sports world might never have witnessed his gift for the game was overwhelming to Johnson — and everyone else — in that moment. It crystallized, in one half-minute of television, what the abortion debate is all about. The world will never know how many millions of stories there would have been if more moms had been told the truth: that their babies had value and purpose and potential — not because of what they could do, but because of who their Creator made them to be.

Curry was fortunate. But for every baby like him, there are so many others whose lives are ended before they begin. Theirs are the 63 million voices we’ll never hear, performances we’ll never see, and Heisman winners we’ll never meet because of abortion. If Sonya’s story can save just one of them, the courage of those 255 pages will mean more than any basketball legacy ever could.

I believe the key to ending a “Summer of Rage” across America following the striking down of Roe. v. Wade lies with American women. They have always been the most important spiritual and moral anchor of U. S. culture as chronicled in the Robert Bellah’s award-winning book Habits of the Heart.

If the anarchists and abortion-promoting women rise up this summer, the warrior mothers of America must pray, march, and speak the truth to the nation–and prevail.

Children are precious–a gift from God. There are no unwanted babies in America.

Rise up–warrior women of America. This must be your finest hour.