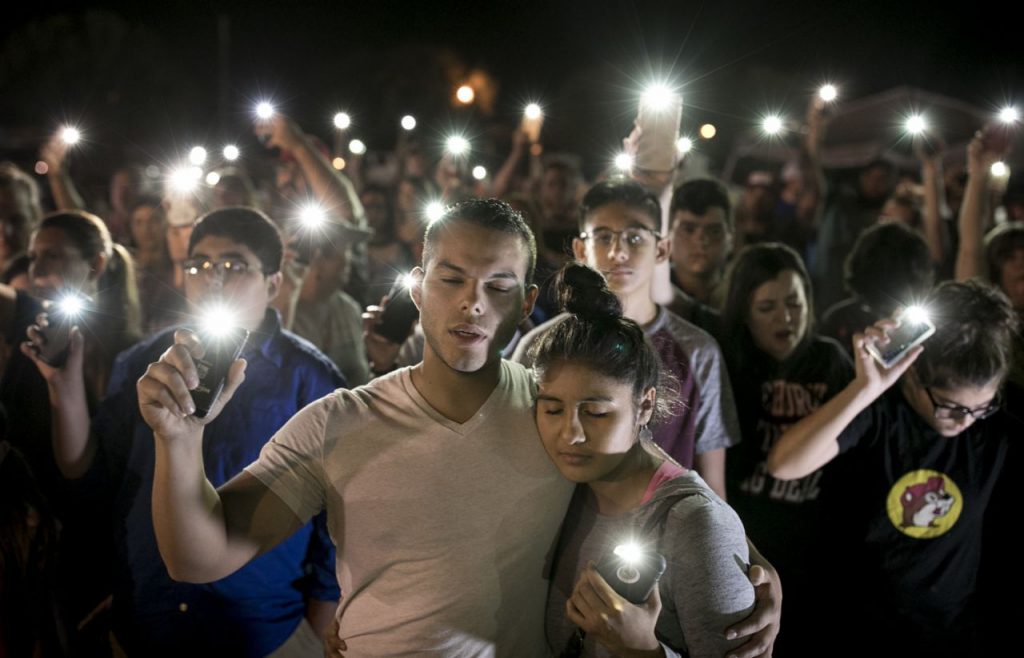 The most horrific church massacre in U.S. history at First Baptist Church in Sutherland Springs, Texas reveals many things.

We sadly see the face of evil once again and the carnage that comes from it. We view the heroism of the Good Samaritans who shot and chased down the despicable murderer.

We hear the clamor for stricter gun laws and the response that no laws could have prevented this crime and that Texas-carry laws actually prevented more deaths.

But what are the larger lessons? I submit they include the devil’s momentary advantage and Christ’s eternal hope.

I hate to admit it, but in some ways the devil has the edge in today’s world.

Martin Luther, who lit the candle of the Protestant Reformation five hundred years ago,  wrote a famous hymn that I vividly remember as a youth. In it, he gave credence to the power and ferocity of Satan or Lucifer.

“A Mighty Fortress” contains this opening and illuminating verse:

A mighty fortress is our God, a bulwark never failing;
Our helper He, amid the flood of mortal ills prevailing:
For still our ancient foe doth seek to work us woe;
His craft and pow’r are great, and, armed with cruel hate,
On earth is not his equal.

I appreciate Luther’s perspective. He doesn’t pretend the devil doesn’t exist. He equally refutes the notion that Satan is powerless–nothing to worry about. Rather, he states that Lucifer’s skills and weapons are greater than any person on earth.

When I first sang those words as a child, I remember imbibing a healthy fear of  Satan’s treachery–not respect for him or his character, but healthy understanding that he can do hideous things.

We saw the devil’s true nature expressed in the actions of the Sutherland Springs killer.

(I will not mention the shooter’s name, nor do I believe his photo should printed. Many mass murderers live for their “day of fame.” Let’s not give it to them. Whenever a crazed or mentally disturbed person commits atrocities, let’s print a silhouette of a horned monster and leave it at that.)

Here’s a chilling description of last Sunday’s “woe” and “cruel hate” when Satan incited the most recent mass murderer who took 26 precious lives. The report comes from Max Jaeger of the New York Post:

“The Texas shooter issued one order to his victims as he prowled the tiny church: ‘Everybody die, motherf–ker!’”

“That was all [the shooter] said as he methodically killed 26 people and injured 20 more inside the First Baptist Church of Sutherland Springs on Sunday, survivor Rosanne Solis told ABC affiliate KSAT.”

“[The shooter] opened fire from outside the church, then paused before entering and resuming his onslaught. The brief halt in gunfire gave Solis hope that the cavalry had arrived — then [the shooter] issued his chilling command, the survivor said.”

“’I thought it was the police when he went inside because everyone got real quiet. Everyone was saying, ‘Be quiet. It’s him. It’s him.’ Then he yelled out, ‘Everybody die motherf—!’ and he started shooting again,’ she recalled.”

“Solis, who suffered a gunshot wound to her shoulder, said her only option was to play dead.”

“’There was nowhere to go,” she told ABC News. ‘I played dead, and I made sure that I hid myself good underneath that bench. I saw bodies with a lot of blood — that’s all I saw because I wasn’t about to get out from where I was hiding.’”

“’I shouldn’t have gone to church that day,’ she remembers thinking as she huddled under the pew.”

“‘[The shooter] targeted anyone who made a peep, and had no qualms about shooting babies who couldn’t control their fear,’ her husband Joaquin Ramirez told the San Antonio Express-News.

“’The babies were crying, and when they were crying: Rat-tat-tat-tat,’ Ramirez told the outlet in Spanish translated by The Post.”

“Ramirez, who was hit by shrapnel in the fracas, held a finger to his lips to silence 14-year-old victim Annabelle Pomery — the pastor’s daughter and one of 26 killed — as she cried for help, because he knew [the shooter] would target her for making noise.”

Those paragraphs are hard to read. They were more hideous to experience. We need to spend much time praying for the survivors of the victims–for God’s comfort and grace to fully permeate and renew their hearts (despite what the atheist elites say).

So why does the devil, his demons, and human beings who cooperate with them have somewhat of an advantage in our world?

First, because humans are free, moral beings who are fallen. Adam and Eve’s sin many millennia ago brought a curse and depravity upon the human race making it is easier to be selfish than to choose good. This is the clearest and best explanation for the state of the planet–with hatred, wars, disputes, pride, dissension and murders thriving as cancers in every nation.

Humankind’s fallenness makes the greatest sense when looking at the evidence. Bad exists in every heart-and-home because it’s a tendency of the human fallen condition.

Don’t believe the utopians and false religions proclaiming that people are basically good. The evidence says otherwise. Most of us don’t kill, but all of us hate. And without God in the world (Christ’s salvation changing hearts), the evil would be much greater.

Secondly, the devil has an advantage over human beings because demons don’t age. Every malevolent spirit in the world, like the one who stirred up the hatred of the Sutherland Springs killer, has been around for thousands of years. Human beings come and go. Demons remain, and keep deceiving in every generation. That gives them a longevity and honed-craft advantage that is significant.

Add to that, number three: Satan plays the “long game” better than us in influencing many aspects of culture including Hollywood (sex and violence), parts of government (e.g. killing babies through abortion), and portions of education (throwing God and the Bible out of the schools and universities.)

The result: A coarsening culture where anarchy are violence rear their ugly heads more often and are spread 24/7 by the wonders of technology. (I just finished America’s  number one best seller Killing England by Bill O’Reilly. Two hundred years  ago it took months for news to cross the ocean. Today, it  pops up on TVs phones instantly–multiplying fear, evil, and copy-cat perpetrators.)

I also believe evil is gaining strength and boldness in our world because the devil knows his time is short. His “Alamo” has begun and he must get it his final licks before he’s eternally assigned to hell and damnation.

Now to the greater, eternal reality.

Martin Luther ultimately proclaimed: “A Might Fortress is our God!” Jesus Christ came to earth and died for the sins of the world. He rose from the dead to strip Satan of his power, both on earth and in eternity. His people can move in the power of the Holy Spirit to see individual hearts changed and nations impacted by his love.

Even those who died at First Baptist Church didn’t lose. They went from worship on earth to the glories of heaven. They were already “dead to themselves” and eternally Christ’s. Jesus had given them eternal hope which no devil or demon can rip away (Romans 8:35-39).

Stand on Christ’s eternal hope today. The devil’s advantage is obliterated by the love and blessings of Jesus Christ.

Did we in our own strength confide, our striving would be losing,
Were not the right Man on our side, the Man of God’s own choosing:
Dost ask who that may be? Christ Jesus, it is He;
Lord Sabaoth, His Name, from age to age the same,
And He must win the battle.

And though this world, with devils filled, should threaten to undo us,
We will not fear, for God hath willed His truth to triumph through us;
The Prince of Darkness grim, we tremble not for him;
His rage we can endure, for lo, his doom is sure,
One little word shall fell him.

That word above all earthly pow’rs, no thanks to them, abideth;
The Spirit and the gifts are ours through Him Who with us sideth;
Let goods and kindred go, this mortal life also;
The body they may kill: God’s truth abideth still,
His kingdom is forever!