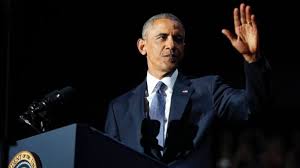 I wrote my very first blog eight years ago when Barack Obama was seeking the office of the presidency. Since then, some four hundred subsequent articles have come and gone with 23 of them devoted to our 44th president.

Tuesday night, President Barack Obama gave a Farewell Address in his hometown of Chicago. I listened carefully to the speech and tried to absorb what I was hearing and seeing.

Who is Barack Hussein Obama and how will he be judged by history?  More importantly, how is his legacy as a leader of the Free World seen by the God of Heaven?

Here is my humble assessment. I’d love to hear yours.

I’ve been interested in leadership all my life and served as a YWAM leader in many different capacities. I have a special interest in presidential leadership due to spending seven years in Washington, D.C. during the Reagan era and concluding that the most powerful man in the world–the US President–wields great influence on national and global affairs.

Additionally, I’ve personally studied all the US presidents and have a section of my library devoted to the biographies and writings of them all (the last book on the shelf is Dreams from My Father–Barack Obama).

Finally, I currently serve as the director of the Masters in Leadership (MAL) program at Faith International University and teach a number of courses on the subject.

So leadership, especially related to spiritual awakening and nations, is important to me.

National renewals don’t normally spring from political leaders (Hezekiah and Josiah are historical exceptions), but since “righteousness exalts a nation” (Proverbs 14:34), government leaders can be incredible conduits of spiritual awakening in law and liberty–or powerful influencers toward iniquity and decline.

Interestingly, I have probably taken more criticism and lost more subscribers to the Revive America blog due to my thoughts on President Obama than any other subject. That’s okay. I respect people’s opinions and am simply trying to be faithful as a prophetic voice in this generation.

So, who is Barack Obama and how should we view his tenure as president of the United States?

Let’s begin with the positives.

Barack Obama is a very charismatic speaker with a unique gift of oratory. His final farewell speech greatly impacted people and show-cased his verbal gifts. There have been few communicators as good as he is in American history.

He’s also a likeable guy with an easy-going public persona and big smile. His high approval ratings can be greatly attributed to his charm factor and even “cool” personality.

Probably the most touching moment of his farewell address was when he recognized and thanked his wife Michelle for her contributions as First lady–also Malia and Sasha, their two daughters–who grew up in the fish bowl of the White House. He appears to be a loving family man who is supported by those close to him. That example has been good for America.

He also seems sincere about his vision for the United States and the world. In fact, he never deviated from his core ideology while he resided in the White House. No one can say that Barack Obama was not consistent in his beliefs and policies.

For all those laudable qualities I give him credit.

Now let’s analyze the negative aspects of his Farewell Speech before sharing my conclusion. Here’s what I noticed in the Farewell Address that raised concerns:

So who, in my opinion, is Barack Obama? How should we judge his presidency?

Only God knows the heart. I will not speculate on his motivations. He seemed sincere in all he attempted to do for the United States and the world. That could be true or false. Only the final day of judgment will fully reveal human motivations.

Yet Jesus said we should judge a tree by its fruit (Matthew 7:16)–a life by its actions. So what are some of the “biggest apples” on the tree of our 44th president:

That makes him one of the weakest presidents of all time. This is due to his deficiencies in the three most important attributes of leadership:

1. Character – He had a hard time telling the truth (e.g. Benghazi and Obamacare) and being transparent.

2. Competence – He was one of the least qualified people to occupy the Oval Office, having never held an executive leadership position or previously run a business.

3. Worldview – His policies were secular (atheistic) and this pointed the nation in a number of godless directions. This is one reason why Pew Research reported recently that during the Obama Administration, professing Christians in the United States dropped by 7% and atheists grew by 9%.

So who was and is Barack Hussein Obama? Here’s my synopsis.

He was born in Hawaii to a single mom–half white from his mother and one-quarter Arab and one-quarter African from his Kenyan father. He was raised in privileged schools (through the help of grandparents) and became acquainted with Islam through a step-dad in Indonesia.

He used his remarkable gifts and ambition to graduate from Harvard, work hard as a community organizer, then rise to state senator, US Senator and President of the United States.

His foremost teachers were secular progressive socialists: His dad, Barack Sr., His mentor, Frank Marshall Davis, his literary idol, Saul Alinsky, his “pastor,” Jeremiah Wright, and the man in whose living room be began his political career–Bill Ayers, an unrepentant terrorist.

Barack Obama is a secular man with a veneer of Christianity and strong sympathies to Muslims. He is committed to social justice and income redistribution due to his progressive worldview and wanted to “transform” America into a social democratic state (like in Europe).

He succeeded to a degree. He failed when the nation rose up and chose Donald Trump to roll back the progressive tide.

This will be my last blog on Barack Obama–unless some major event catapults him again into the American consciousness. What does the future hold for him?  A lot of golf, building a presidential library, and maybe one final political ambition: becoming Secretary-General of the United Nations.

Let’s pray for him and his family as they leave public life–that they would have an encounter with the True God and live for His glory. Let’s also pray, conversely, that he does not take the wrong path and rise to lead a secular “new world order” in the foreseeable future.

That promotion would be worse than the first.

Posted in Character, Leadership, Politics
← My View of the World–2017Seeing Through a Glass Darkly →