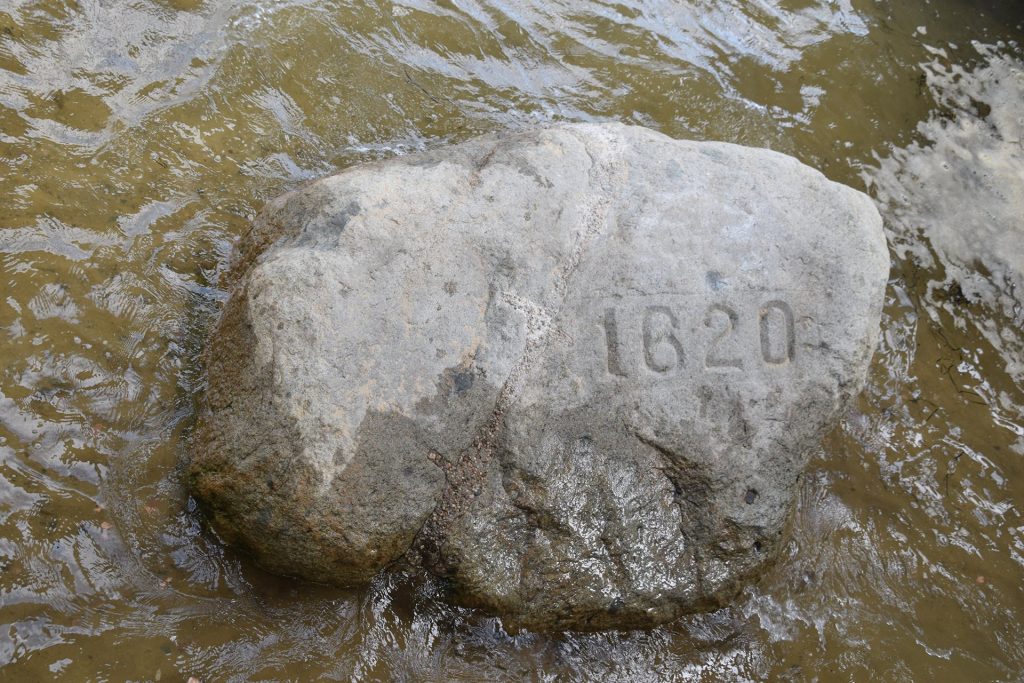 Recently I joined a conference call with Dr. Paul Jehle, the unofficial historian of Plymouth, Massachusetts celebrating the 400th anniversary of the Mayflower Compact. This incredible document, the first political expression of biblical ideas in the New World, had profound impact on American history.

This Thanksgiving we should thank our brave Pilgrim forefathers for their vision, wisdom and sacrifice that led to the making of the United States.

I learned that truth thirty-two years ago through a visit to New England (as recorded in my journal).

My visit to Plymouth Rock.

My Visit to Plymouth Rock

On December 15, 1988 I traveled to Plymouth, Massachusetts to meet a friend and to see Plymouth Rock for the first time. It was a life-changing experience. Rev. Paul Jehle, local pastor and historian of Plymouth and the Pilgrims, gave me a rare, personal tour of this birthplace of the American nation.

It was more moving than I could have imagined.

We met at Plymouth Rock on a cold, windy day. “The rock” itself was not as big as I expected. It is a smooth stone about seven feet long and four feet thick that was purported to be the largest rock on the beach where the Pilgrims landed on December 21, 1620. The date is carved on the stone. It sits by itself under a stone canopy with pillars around it.

During the centuries since the Pilgrims’ landing, it was moved a few times, and even sports a large crack where it had to be glued back together after falling off a cart. It now rests on the scenic and rocky waterfront on the original spot where it once lay.

It was here — under the same harsh weather conditions–that the early Pilgrims came ashore and began the American experiment of self-government under God. As we walked and viewed various sights, Rev. Jehle shared many insights with me about this great and resourceful people.

We came upon a life-size commemorative statue of William Bradford, the famous governor of the Plymouth Colony. I was amazed at his small size. “All of the Pilgrims were probably about 5 foot to 5 foot 2 inches– a small people,” Paul explained. “It was their faith and their hearts that were big.”

He began his life as an orphan raised by two uncles. At the age of twelve he gave his life to Christ, and in the company of William Brewster, joined the early pilgrims in England. By eighteen, he had become an elder in the group and went to Holland while being persecuted by both the Anglican Church and the British Crown.

In August of 1620, the little band set out in the Mayflower for the New World “for the glory of God and the advancement of the Christian faith.” Providentially, they arrived (off course) in Cape Cod. Right where we stood, the Pilgrims came ashore where a brook entered the bay and built their little colony.

Bradford became governor when he was thirty years old. He lived to be 67 and governed the colony all those years except five when he deferred to others. We walked by the place where his home had stood. It was now a bustling corner of modern Plymouth where a CVS Drug store sold its wares.

We entered Pilgrim Hall nearby. Paul gave me the rare privilege of going through an iron gate under lock and key that housed the Pilgrim archives. There I gingerly held Bradford’s large personal Bible (with wood cover & notes). This inner sanctum contained hundreds of volumes of original literature including Bradford’s “History of Plymouth Plantation”– which reveals their early attempt at “communism,” increased prosperity through capitalism, their good relationship to the Indians, and the first Thanksgiving.

Pilgrim Hall is the oldest museum in America. It even contains a crib of a baby boy born on the Mayflower. That child lived to be 84 years old (a long life considering the average lifespan of 35-40 years). The museum portrayed the incredible courage and biblical worldview of our forefathers.

The Pilgrims were a noble people who fulfilled God’s plan to bring Christian civilization to the New World. They were obedient in their generation, even under difficult circumstances (half of them died the first hard winter after they landed).

This brought many questions to my mind. Would we be as obedient in our generation as the Pilgrims were in theirs?

We continued the tour, driving through hustle and bustle of modern Plymouth. Yet, around every corner loomed a mark of antiquity or sign of the past. At the Pilgrim graveyard on the hill (just above where the first church was built) a gorgeous view of the entire bay spread out before us.

On the hillside stood the gravestones of these great men and women–once lost to time but uncovered by a flood nearly a hundred years after their arrival. There was also a large monument to Squanto, the gracious Indian who befriended them like an angel sent from God. He helped to establish a wholesome and just relationship with the local natives and their chief, Massasoit.

We finished our two-hour tour at the large “Monument to the Forefathers” dedicated in 1889. As we stood beneath this towering granite edifice, all alone atop a hill near the town, Paul shared with me the story that had given birth to this special shrine.

“The monument,” he said, “was built to memorialize the Pilgrims and the vision they brought to the New World. Five large statues were integrated into one towering spectacle. The pinnacle of the monument contained a statue called ‘Faith’ which symbolized their trust in God and dependence on the Bible. Underneath it stood were four other statues. One symbolized ‘Morality’ emanating out of their faith. The second symbolized ‘Law’– both the power of conscience and the wonder of God’s mercy. The third represented the education of youth and wisdom of the elderly. And the fourth symbolized liberty which comes from the first three.”

The pillars of America.

The Pilgrims brought to these shores an unshakable faith in God, righteousness in heart and life, and reverence for God’s law and grace. They established a civil polity based on His commands, education and intellectual prowess based in godly wisdom, and a zeal for His Kingdom to multiply to the ends of the earth.

I was deeply moved as Paul related these truths and shared many other stories. We were standing on holy ground I must never forget.

I learned later that Paul and his church had almost single-handedly revived interest in the Pilgrim heritage. Students from their Christian school served as the official guides of the town. In 1989 they would be help lead a one hundred-year anniversary of the “Monument to the Forefathers.” In many other ways they served the local community as modern-day pilgrims.

After thanking and saying goodbye at the New Testament Church, I began my ride home.

What a blessing to visit Plymouth Rock. I had preached about the faith of the Pilgrims before. Now I had stood where they launched their true American dream.

The Pilgrims gave birth to the most free nation in history. They built it on the wise foundation of faith, morality, law, and education–producing liberty.

I want to help rebuild that foundation. The equation remains the same. God’s ways have not changed–we have just forgotten and neglected them. Today the vision must be reborn through the passionate lives of millions of Americans.

On this special America holiday, be respectful to your civil authorities–but supremely obedient to Jesus as you celebrate His goodness. And thank God for our Pilgrim ancestors.

Posted in Character, Freedom, General, History and tagged Mayflower Compact, Monument to the Forefathers, Paul Jehle, Pilgrims, Plymouth Rock, William Bradford
← If the Vote Stands We Are a Foolish NationAre You Growing Your Cultural Trinity? →