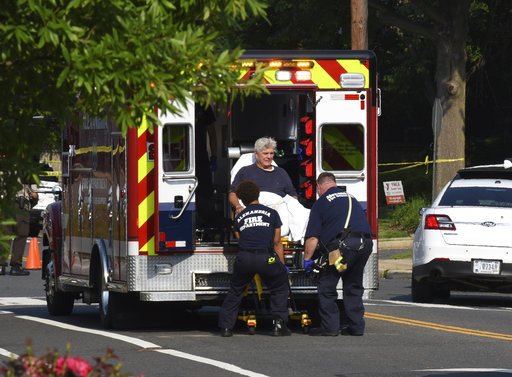 I intended to write an article today on the dangers of an out-of-control and extremely biased national media in the United States.

But the brazen gun attack on Congressional Republican leaders–practicing at an Alexandria, Virginia baseball field for a bipartisan charity game with their Democratic colleagues–changes the focus.

Things are coming unhinged in this nation. Let’s ask an obvious question:

Is the “Resistance” responsible?

You may be surprised by my answer.

I’m sure you’re aware of what happened. This morning (June 14), around 7:15 am (ET), a lone gunman with a rifle, started spraying a high school field near the nation’s capital with bullets as fifty Republican Congressional leaders and some of their aides enjoyed a light-hearted baseball practice.

Since 1909 (over one hundred years!), Congressional leaders leave the corridors of power for a few hours, forget about their partisan divides, and play a baseball game for the fun of it. The amicable contest always pits the Rs versus Ds with each Congressman or Senator wearing a jersey symbolizing their state.

This morning the Republican leaders gathered for practice prior to the June 15 event. The Democrats did the same at another location.

Suddenly, a gunman appeared and fired 50-100 rounds of bullets over a period of ten minutes at the startled leaders. Rep. Steve Scalise, House Majority Whip, was hit in the hip near second base and began crawling into the outfield leaving a trail of blood (he is in the hospital in stable condition after surgery). Three others were also shot.

Senator Rand Paul was present said “It could have been a massacre.”

If it weren’t for the presence of members of Rep. Scalise’s security guard returning fire, along with Capitol police, the toll could have been much higher.

The shooter, who is not worthy to be named, was shot and killed. Reports now show he was a disgruntled Bernie Sanders supporter from Illinois whose social media pages display his venom at Republican tax policies and other issues.

He tried to kill some of our leaders to vent that anger.

At this point, leaders on both sides of the aisle are saying the right things and uniting behind their colleagues. That is a good sign. Sometimes horrific circumstances bring us to our senses, at least for a time (think 9-11).

But it’s also important to look deeper behind what is taking place in America in 2017. One place to look is at a movement that calls themselves the “Resistance.”

Ever since Donald Trump stunned the political world by earning enough votes to become the 45th president of the United States, a well coordinated movement has emerged to de-legitimize his presidency, torpedo its policies via the leaks of the Deep State, or out-right push for impeachment on no other grounds than the fact that they don’t like him and his ideas.

That’s not right in a free republic. When the people speak via the ballot box, it’s okay to be sad, concerned, or greatly disappointed. That’s how I felt after the elections of 2004 and 2012. My candidates in both elections lost–driving me back to prayer and action to support good candidates and policies four years later.

When Trump won fair and square in 2016 (Russia collusion was always a lie), those on the losing side should have mustered the same response. The civil thing to do when you lose, in sports or in politics, is to shake the hand of your opponent, analyze and take responsibility for your loss, and go to work to win the next time around. It’s gallingly selfish to pout, throw a temper tantrum, and attempt to undo the will of the people.

Republics have both constitutions and democratic processes. Civil people work through both. They don’t try vindicatively tear them down.

Hillary Clinton, whom Donald Trump defeated for POTUS, never seemed to take personal responsibility for her electoral loss. In recent appearances, she offered numerous excuses as to why she failed–then promptly announced she was joining the “Resistance” of the Trump presidency.

Let’s first analyze the most recent usage of the word.

Two weeks ago I told the story of my Uncle Dick’s bravery in World War II. He was a pilot who was shot down in Europe three times in the space of five months. The first two times (prior to his untimely death in the third crash) he was rescued by members of the “Resistance” in Italy who saved his life from drowning, hid him from the Germans, and courageously led him out of occupied territory and back into combat.

In the 1940s, the “Resistance” was made up of  freedom-loving people in Europe who actively tried to stop the evil brutality of the Nazis. To resist was to stand up to a bloody tyrant. In those dark days, it was a sign of great morality and courage to fight for the “Resistance.”

Corrie ten Boom is a famous Christian author/spokeswoman whose family served the Resistance movement in Holland by hiding and helping Jews escape the gas chambers. Her family’s commitment to resisting Hitler led to their imprisonment in a German concentration camp where some died. Corrie was eventually released due to a clerical error, lived to tell of the horrors of the Holocaust, and spent the remaining years of her life championing the message of Christ and his forgiveness.

I had the privilege of meeting her in 1974. Her book and movie “The Hiding Place” have touched the hearts  of millions of people worldwide.

Corrie and many others resisted evil for Christ and his freedoms. In the 40’s, resisting the Third Reich was totally appropriate and right.

Seventy years later, sore-losers and progressives in our nation have stolen the term to  manufacture sedition against a popularly-elected president. You may not like Donald’s Trump’s personality, style, or his policies, but to equate him with a Hitler-like persona and fan the flames of hatred is idiotic, insulting and completely uncivil.

Now an angry, embittered Democratic activist comes to a baseball practice and tries to kill dozens of our Republican leaders in cold blood.

Is the Resistance responsible for this horrific act?

They have created an accepted atmosphere of hate in the United States that is unparalleled in my lifetime. Even the resistance to the Viet Nam War came nowhere near the level of hostility and anger that is aimed at President Trump.

Let’s be honest. The America character has fallen to new lows.

Here’s where I put the blame:

Here’s the plain truth as to why many Congressional leaders were attacked today:

“Where there is no vision [no revelation of God and His word], the people are unrestrained; But happy and blessed is he who keeps the law” (Proverbs 29:18 – Amplified Bible).

No fear of God (respect and self-control), no restraint.

Let’s pray and work for change.

Start with your own heart.