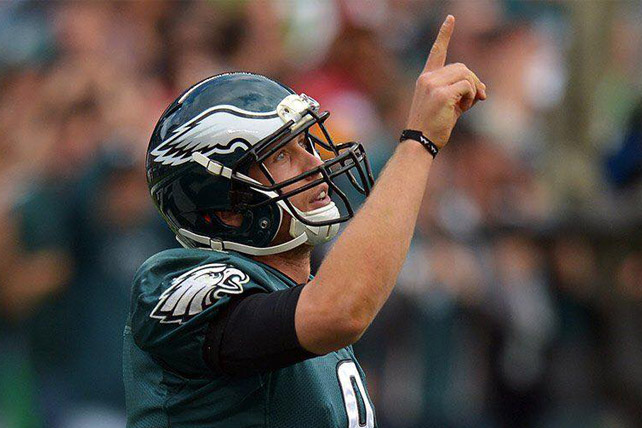 If you’re a football fan, I’m sure you enjoyed Super Bowl 52 where the GQOAT (Greatest Quarterback Of All Time)–Tom Brady– passed for 500 yards but still lost to a back-up quarterback named Nick Foles.

Foles and the Philadelphia Eagles 41. Brady and the New England Patriots 33.

Great Game. David vs. Goliath in a photo finish when Brady’s last second Hail Mary pass into the end zone fell harmlessly to the turf, and the Eagles from the City of Brotherly Love won their first-ever NFL Super Bowl Championship.

Glance at the picture above and notice the finger of Nick Foles pointing upward after the victory. I love that gesture which means one very important thing:

For the glory of God.

Are you living with that same motivation?

When Nick Foles realized that the Philadelphia Eagles had won Super Bowl 52, he raised his eyes upward, pointed his finger toward the heavens and gave all the glory to God.

Gave glory to God.  What does that mean?

To give “glory” to someone else is to give them credit and honor for something they’ve done. It is to deflect praise from yourself to another who is more worthy of that adulation.

This act takes great humility and the willingness to see things in reality:

Humility is the opposite of pride, which selfishly pretends that I am the center of the universe, self-made, and should be congratulated for my achievements. That attitude cost Lucifer his place in heaven and curses every human being who follows his example.

It’s humble faith that gives God his rightful place in our lives.

Rick Warren is right. It’s not about you. Everything you have and are comes from others, especially your Maker and Savior God. The paint can’t take credit for the painting–that goes to the artist. The rocket fuel  and boosters don’t applaud themselves for a successful SpaceX launch. That honor goes to the visionaries, producers and technicians who created and operated it all.

When Nick Foles exercised refreshing humility and pointed millions of people to the reality of the Incomparable God, he gave great glory to Jesus Christ who once said in divine humility:

I’m praying that multitudes of people will launch their salvation journey through watching Nick Foles point the way.

The Washington Post told part of Foles’ personal story this past week.

“’I want to be a pastor in a high school,’ Foles said Thursday. ‘It’s on my heart. I took a leap of faith last year and signed up to take classes at seminary. I wanted to continue to learn and challenge my faith. You want to impact people’s hearts.’”

“Foles is part of a team that has a strong Christian brotherhood. MVP contender Carson Wentz has been outspoken about his faith and many players spend a lot of time together in prayer, studying the Bible and sharing devotionals.”

“Foles was one of the study leaders during his first stint in Philadelphia and has become a go-to source for younger guys. Left guard Stefen Wisniewksi also plans to become a pastor after his career ends. ‘Guys like Nick and Wis can spit out Scripture all day and it’s awesome to take in that knowledge,’” said special teams ace Kamu Grugier-Hill.”

“Foles is passionate about helping students find their way and plans to use his experiences to inspire and encourage them.”

“‘When I speak to (students), that’s such a time of young men and young women’s lives that there’s a lot of things that are thrown at them. So much temptation in this world, so much going on with social media and the internet that you want to talk to them and address it and share all the weaknesses I have because I’ve fallen many times,’ Foles said. ‘It’s something I want to do. I can’t play football forever. I’ve been blessed with an amazing platform and it’s just a door God has opened, but I still have a lot of school left and a long journey.’”

“Foles says prayer helped him decide to stay in the NFL, and he returned to the Eagles to be Wentz’s backup. When Wentz tore his left ACL in Week 14, Foles stepped in and led Philadelphia.”

“’It took a lot more faith to come back and play than it would’ve to go in the other direction,’ Foles said. ‘Either way would’ve been fine. Either way, I would’ve trusted in God. I would’ve done something else and glorified God in that instance.'”

Nick Foles is one of many Philadelphia Eagles who understand where their true power comes from.

“Philly fans have a reputation for being a little raucous. Did you know they once booed Santa Claus and threw snowballs at him? This year’s Eagles are an entirely different breed. Many attend regular  Bible studies, they constantly talk about their faith and they say they just want to glorify God in all they do.”

“And one other detail separates the 2017 Eagles from their predecessors, the nice guys have a Super Bowl ring.  After Super Bowl LII, arguably the most entertaining of all time, the Eagles kept up their praise of God. Those who have been most outspoken in their faith also made a huge impact in the game.”

Did you notice that when the Super Bowl trophy was presented to Coach Doug Peterson, tight end Zach Ertz (who caught the winning TD pass), and Nick Foles, the first thing ALL THREE did was give glory to God?

How can we bring glory to God and follow their example?

Here are some suggestions from John Piper entitled, “How We Bring Glory to Our Heavenly Father.”

Piper ends with this encouragement:

“Glorifying God is not a weight to make us sigh. For it is wings to make us fly. On wings like eagles.”

“But those who hope in the Lord will renew their strength. They will soar on wings like eagles; they will run and not grow weary, they will walk and not be faint” (Isaiah 40:31).

I remember the first time, and many times since. when I intentionally committed myself to live for the glory of God, the One who truly deserves all the praise and the honor.

Is that your motivation for living?