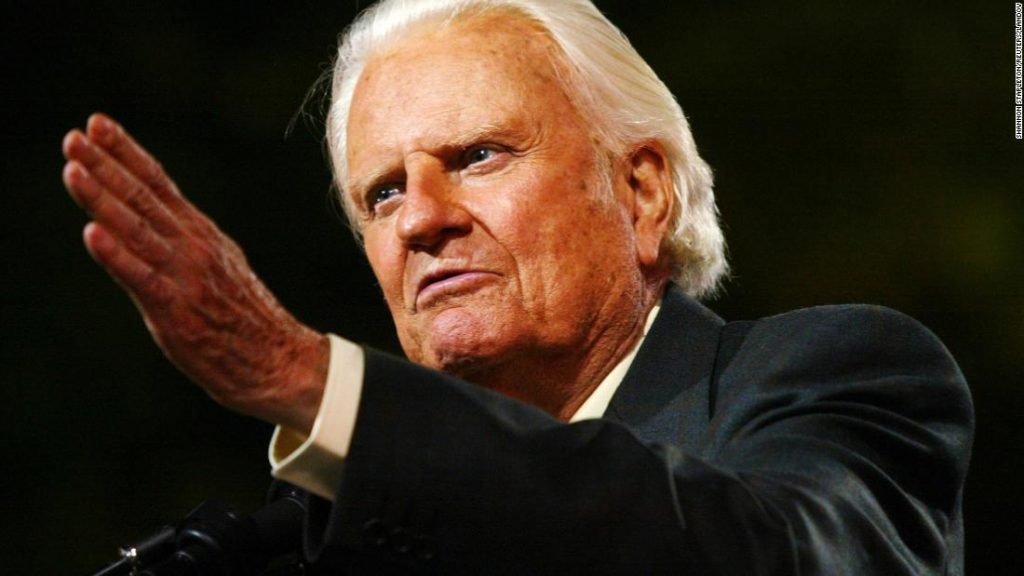 This world lost a great figure last night when Billy Graham passed from this earth to his heavenly home.

I’d like to honor the memory of Billy Graham, not only for who he was, but to give glory to the Person who made him so–the Lord Jesus Christ.

I remember many wonderful things about Billy Graham, but one stands tall above all else:

You must be born again.

I had the privilege of meeting Billy Graham in person a few times during the 1980’s.  My most special memory was having lunch with him and Loren Cunningham and two other friends just prior to his D.C. crusade in 1986.

We met at a restaurant near the crusade venue and enjoyed a hour or so together over lunch. Dr. Graham was easy to be around and shared a trait that most great leaders possess–he didn’t talk about himself but seemed very curious about the needs and lives of those at the table.

I was impressed–and grateful for the opportunity. Billy Graham was one of my heroes.

Before I share some of the traits that I admired in him, here’s a quick bio to help put his life into historical context.

His was a life well lived.

Billy Graham was born Nov. 7, 1918, in Charlotte, N.C., and raised on a dairy farm. He graduated from Wheaton College in Wheaton, Ill. – the current home of the Billy Graham Center Museum and where he met his wife, Ruth McCue Bell, the daughter of a missionary surgeon to China. They were married for over 60 years until Ruth’s death in 2007.

He personally gave his life to Christ during a crusade meeting in Charlotte, North Carolina in 1934 led by evangelist Mordecai Ham.

Rev. Ham gives the historical detail: “Two young high school boys attended our meeting. They thought that everything I said was directed their way; so they decided to take seats in the choir, where I couldn’t point my finger at them. They didn’t pretend to be singers, but they wanted to be behind me.”

“One night a man spoke to them during the invitation and said, ‘Come on; let’s go up front.’ Billy and Grady (Wilson) both went to the altar. Billy was saved, and Grady dedicated his life to Christian service.”

That was a night that impacted the world.

Billy Graham went on to preach the Gospel to more people in live audiences than anyone else in history. The Billy Graham Evangelistic Association estimates that he preached live to nearly 215 million people in more than 185 countries and territories, and hundreds of millions of more people through television, video, film and webcasts.

He led hundreds of thousands of individuals to make personal decisions to commit their lives to Jesus Christ. He certainly impacted my life with his witness.

Following are some of the qualities that I most admired about him.

First, I deeply appreciated his humility. Though he probably shook hands with and knew more heads of state and VIPs than most people in history, he possessed a down to earth quality about him that made him very approachable. Maybe it was his farm roots and blue collar background. But the higher he rose, the personal humility stayed the same.

Part of his humility included his willingness to admit mistakes and learn from them. He regretted later in life his lack of involvement in the civil rights marches of the 1960’s saying, “I should have gone to Selma.” He was also deeply sorry about his undiscriminating relationship with former president Richard Nixon who was exposed  during the Watergate revelations. Graham repented for his naivety and vowed to never make that mistake again.

He continued to advise and counsel many presidents and world leaders, but with a closer eye to not condoning bad behavior.

Second, he mentored two generations of Christian leaders in moral purity and integrity. Early on in his public career, he made a decision to never be alone in a room with a woman not his wife so that his testimony would be above reproach. When he traveled and stayed in hundreds of hotel rooms during his seventy years of evangelistic work, he always placed associates on either side of his own room–so that his virtue and integrity as a follower of Christ would not be sullied.

In today’s world of #MeToo and with the revelations of sexual assault and improprieties mushrooming daily, Dr. Graham’s principles stand out as a shining light. He not only didn’t assault or prey on women, he went out of his way to avoid all appearances of evil.

Vice President Mike Pence recently said he practiced the same principles (learned from Billy Graham), and people laughed at him. In today’s environment of debauchery, should anyone be snickering? No. They should be grateful that Billy Graham raised the bar for generations of leaders.

Third, Billy Graham knew who He was . He understood God’s call on his life. Due to his high profile notoriety, he could have dabbled in politics, business, and many other ventures. But he was ordained by Jesus to be an evangelist–and stuck to that mandate like a laser. (His son, Franklin, follows his father’s example when, in every interview, he shares the truth of John 3:16).

Finally, the Rev. Dr. Billy Graham knew the simple message God had given him to share with the world. It was concise, powerful, and true.

No man in the history so focused on those five important words. I, for one, took them to heart and found salvation in Jesus Christ in 1968. So did many others.

Humility. Purity. Calling. Simplicity. Billy Graham both learned and was empowered with these qualities by Jesus Christ Himself. That’s why he once admitted when he was asked what was the secret of his ministry: “The secret of my work is God. I would be nothing without Him.”

Jesus gets the credit for the laudable life of Billy Graham.

His son, Franklin, posted these words after his father’s passing: “We honor a man who served the Lord with his life, loved his family, and was always grateful for God’s faithful people who supported him in the work of the ministry in Jesus’ Name.”

“As we lay to rest this very public ambassador, please pray with us that the testimony he leaves behind will touch many lives and point them to salvation in Jesus Christ.”

His grandson, Will Graham, also shared this perspective in a statement to the Christian Post:

“My grandfather once said, ‘One day you’ll hear that Billy Graham has died. Don’t you believe it. On that day I’ll be more alive than ever before! I’ve just changed addresses.’ My friends, today my grandfather moved from the land of the dead to the land of the living.”

“We mourn that he is no longer with us physically here on earth, but we don’t grieve as those who have no hope. My grandfather invested his entire life in sharing the promise of eternity through Jesus Christ, and today he had the opportunity to realize that hope himself, kneeling before his Savior and hearing the words, ‘Well done, good and faithful servant.’”

Now it’s our turn to be faithful, and bring honor and credit to Jesus, the Savior of the world.

You must be born again.

That’s where it all begins.

Posted in Character, General, Religion and tagged Billy Graham
← A Triple Level ConspiracyLet’s Go on Offense and Defense To Protect the Kids →